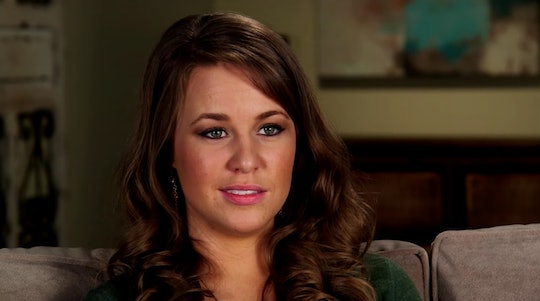 This Could Be Why Jana Duggar Isn't On Instagram

Thanks to their various reality TV shows through the years, the Duggar family has shared so much of their lives with viewers across the nation. And when TLC's Counting On isn't trying to catch up with what's happening in real time, most of the older children of Michelle and Jim Bob can be found on Instagram. There, fans can getting the latest scoop on engagements, pregnancies, and the ever-growing list of Duggar grandchildren. However, some fans have probably wondered: Why isn't Jana Duggar on Instagram?

Jana, 28, is the second-eldest of the 19 Duggar siblings. And yet, she seems to be the only one of the older brothers and sisters who isn't on the social media platform. So what gives? Although In Touch Weekly had previously reported that Jana's social media absence could be explained by a Duggar family rule set by patriarch Jim Bob himself, that's simply not the case.

This clarification came from a recent Instagram post by Jana's younger sister, Jessa Seewald. In the comments, a follower had asked why Jana was MIA on Instagram. Another fan, according to OK! magazine, replied with, "I think their family has their own rule that they can't have their own social media until they are in a relationship."

Jessa didn't waste any time shutting down this commonly-believed theory. "It’s not a rule, it’s just coincidence, 😂" she replied, according to OK! magazine.

Interesting, right? (As a longtime follower of the Duggar family, I had also assumed this to be true.) Naturally, this begs the question: If Jana isn't keeping away from Instagram because of a family rule, then why has she opted out of the social media platform when nearly all of her other adult siblings are on the IG?

One reason could be that she's simply busy —and social media isn't a priority at this point in time. Jana still lives at home with her parents, after all, and is very active with her younger siblings. Aside from helping her mom with the kiddos, cooking, and cleaning, Jana serves as a concert pianist, according to a Duggar family Facebook update, and keeps up with an extensive garden on the family's sprawling Tontitown, Arkansas property. "The garden has definitely been something that I've enjoyed — it's just a nice, peaceful kind of getaway," she said in a Counting On clip from April.

As evident by past TLC episodes, Jana also has quite the eye for home renovations projects and interior decorating. She has helped give Jinger and Jeremy Vuolo's kitchen a whole new look, plus she aided Jessa and Ben Seewald when they needed to add more lighting to their master bedroom — just to name a few recent endeavors. Oh, and did I mentioned she's trained as a doula? Yep. This Jane of all trades is one busy gal.

Another possible reason for Jana's Instagram absence could be that she's witnessed the bullying and shaming that her family members have experienced online — and wants to stay as far away from that nonsense as possible. From Jessa Seewald getting flak for her young sons not wearing shoes, to Jill Dillard getting mom-shamed for not baby-proofing her home soon enough, to Jinger Vuolo getting slammed for putting mittens on her daughter, online trolls will nitpick at every little thing that's posted. So could you really blame Jana for not being all over Instagram after reading what internet strangers write about her family?

For the time being, at least, it looks like Counting On fans will have to rely on the Duggar family Instagram account (run by Michelle Duggar) or the accounts of Jana's siblings if they want to keep up with her on social media. And maybe that's just how Jana prefers it.