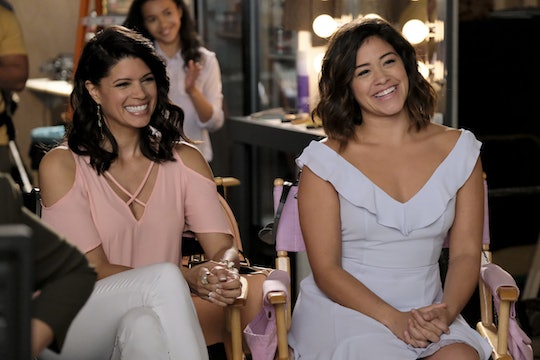 'Jane The Virgin' Is Going On Another Hiatus

Monday is probably the most hated day of the week, but there's one great thing about the first day of the work week: Jane the Virgin is on! Except this week it's not and won't be for a while. So why isn't Jane the Virgin on? A different show will be taking it's place, at least for the next few weeks.

For at least the next two Mondays, Penn & Teller: Fool Us will take the place of Jane the Virgin on The CW. The show is a competition in which aspiring magicians are invited to perform their best trick and try to fool the legendary duo Penn & Teller. The show last aired back in September and it appears these episodes will be reruns from the latest season.

Thankfully, JTV fans won't have to wait too long before they're reunited with their favorite characters. The third season will pick up right where it left off on Monday, April 24. When the show last aired, all the characters were mixed up in some messy romantic entanglements. Then again, what else is new?

Xo and Rogelio finally got back together and consummated their relationship — something Jane really didn't need to know. Alba and Jorge had an interesting date at the mini-golf course when they ended up hiding from Jane who was on her own date with Dennis. Alba and Jorge ended up making out and Alba even performed a walk of shame the next morning. While she didn't have sex with Jorge, she did admit to Xo and Jane that she wanted to.

Jane and Dennis' date didn't end nearly as well, at least not for Jane. Dennis decided to give his ex another chance, thereby ending Jane's first attempt at dating again after Michael's death. However, by the end of the episode Jane had her eyes set on a new love interest: Rogelio's super hot costar, Fabian. Both Jane and Xo were drooling over him and based on the preview for the next episode, it looks like Fabian will be interested in Jane too.

Rafael didn't get so lucky. After having sex with Petra, Rafael was worried she'd developed feelings for him again, but the truth was she was still into Chuck, who decided to give her a second chance. Unfortunately, this happened around the same time Rafael realized he was the one who still had feelings for Petra. It looks like there's a new love triangle on the show.

Though waiting to find out what happens next is frustrating, at least it's only three more weeks.