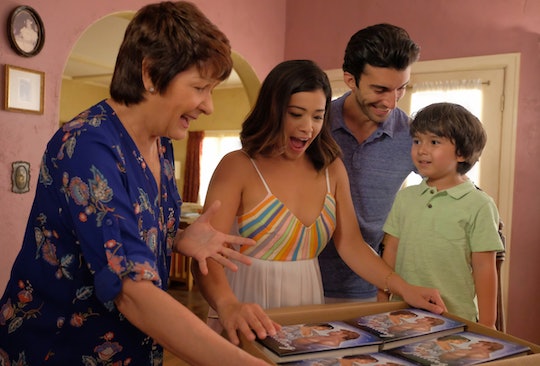 'Jane The Virgin' Is Taking A Short Break This Week

Although most people didn't have a full week of work this week, there's still something great about it being Friday, especially Black Friday. But there is something missing from your usual Friday night TV line-up. There's no new episode of Jane the Virgin debuting. So why isn't Jane the Virgin on tonight? Believe me when I say, it's for a good reason.

In place of seeing your favorite Villanuevas, the iHeart Radio Music Festival will be airing from 8 to 10 p.m. EST on The CW. But unfortunately, this won't be the only Friday you'll miss seeing Jane on your TV screen. The following Friday, Jane the Virgin will be replaced with Grandma Got Run Over By a Reindeer, which may make you reminiscence over that very recent time when Rafael got run over by a car.

After that, Jane the Virgin will finally return on Dec. 8, but don't get too excited because it's the midseason finale. After that the show will go on hiatus and won't return until next year, but hopefully the midseason finale will be enough to tide you over, and it definitely looks like it will be.

Now that Jane's book is out and she and Adam are over, Jane is ready to live it up on her book tour. Thus begins the Villanueva road trip I didn't know I needed but now can't wait to see. Jane, Xo, and Alba will hop into a convertible and get Jane to all her tour stops while also stopping to party at some bars along the way. However, based on the preview, Jane won't be able to keep it totally together over her break-up with Adam and will have a bit of break down during an interview about the cover. We've all been there.

Speaking of murder, the most important thing the midseason finale will hopefully show, or at least give more insight on, is who killed Anezka? Although Petra found her hanging from the ceiling, the narrator made it clear that there was definitely foul play involved, which shouldn't be surprising with the number of people that are killed off of this show. But who did it? Well, there's a long list of suspects, especially since she currently held all the shares to the hotel after Luisa was institutionalized.

Magda seems like the most likely suspect, because even though she worked with Anezka to get the shares, Magda has never been much of a team player. It's possibly she took Anezka out so she could have the money for herself. Carl, who I should remind you is in fact real and not a figment of Luisa's imagination, is also a suspect. Perhaps he wanted more than what Anezka was offering him.

The suspect list is long and with a two week hiatus before the midseason finale, fans have a ton of time to think of a lot of theories. But while you wait for Jane the Virgin to come back, you should definitely watch the iHeart Radio Music Festival tonight. It will include a number of highlights from the huge concert that took place in Las Vegas, including performances by Lorde, Miley Cyrus, Big Sean, DJ Khaled, and more. It'll be a fun night of music that you won't want to miss.