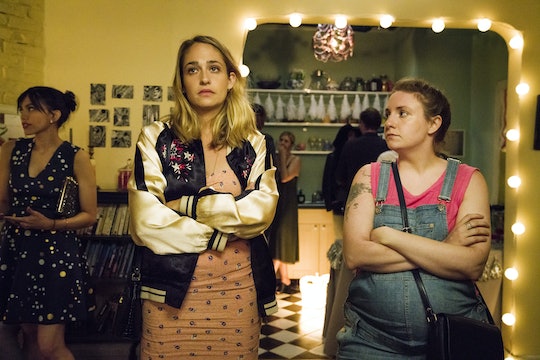 Jessa's Time On ‘Girls’ Has Come To An End

After six seasons, HBO's Girls is finally coming to a close following two strong final seasons. On the cusp of the series finale, Marnie is newly divorced, Hannah is about to give birth, Shoshanna just got engaged, and Jessa has reached a surprisingly stable place with Adam after one final bout of self-destructive behavior. But, of the four girls, only Hannah and Marnie will be featured in the final episode. So why isn't Jessa in the Girls finale? She and Shohanna ended their run in the penultimate episode, "Goodbye Tour."

Lena Dunham confirmed the news in a since-deleted Instagram post on Monday that is all kinds of tear-inducing. "From the first day we paired them together in fall 2010, we knew these two TV cousins had something kinetic," Dunham wrote. "And it’s true — even when they were battling, Jessa & Shoshanna had this insane Hepburn/Tracy Laverne/Shirley energy that just made us laugh so hard and feel so much. Last night was their final episode of Girls. No words for how we’ll miss writing for them, watching them, working alongside them."

But before saying goodbye to Jessa, viewers did get to watch her and Hannah make up at Shoshanna's engagement party. Unfortunately, the heartwarming engagement vibes didn't portend a particularly happy ending for the girls.

When Hannah first arrived at Shosh's apartment, it was to get career advice in light of her job offer. But she entered to find Shoshanna celebrating her engagement without her. To make things more tense, Marnie, who had been avoiding Hannah's calls all weekend, was there, as was Jessa, with whom Hannah hadn't spoken to since their bitter friend-breakup. And although Marnie tried to hash out everyone's problems in an emergency bathroom meeting (paralleling a similar moment from Season 1), this time, it failed.

Shoshanna wanted out from her seemingly unambitious and perpetually messy friend group. Hannah was ready to cut out any and all unsupportive relationships in her quest to find a solid support system for motherhood. And Marnie and Jessa didn't really have it in them to fight the crumbling friendships after that. But Hannah and Jessa did have one final moment of connection.

Jessa gave Hannah a baby gift and became the first person in whom Hannah confided the sex of her baby. (It's a boy!) They also both tearfully apologized to each other, even though they had been fighting for so long that neither of them could remember what to apologize for. So while Jessa won't appear in the finale, it does seem like she and Hannah finally ended on good terms. And in a way, the fact that each of the girls ends the series with so far left to go is a perfect ending.