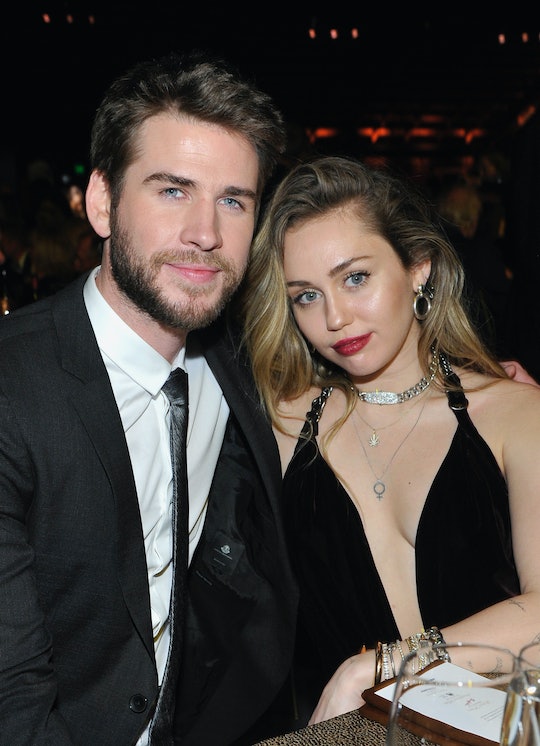 According to Extra, Hemsworth was hospitalized recently, which is probably why he isn't in attendance. The report refers to his Isn't It Romantic co-star Rebel Wilson's interview with Extra, in which she revealed that Hemsworth was in the hospital, which prevented him from joining her during their Sunday movie promotions. "He texted us this morning," Rebel said. "He was in hospital overnight, so hopefully he will be fine.”

Before his reported hospitalization this weekend, Hemsworth spent the last week promoting Isn't It Romantic on shows like Live With Kelly and Ryan and The Tonight Show With Jimmy Fallon. On Sunday, Hemsworth's co-star Priyanka Chopra posted a heartfelt message on Instagram wishing him good health while the cast promoted the movie without him. Isn't It Romantic, which releases Wednesday, Feb. 13, is a romantic comedy in which Hemsworth plays Blake, a hilariously picture-perfect romantic hero who is in love with Wilson's character, Natalie.

The reason for Hemsworth's hospitalization is still unknown, but I'm sure fans are hoping for his speedy recovery. Meanwhile, Cyrus posted a throwback photo of her as a child with her father Billy Ray Cyrus, suggesting he might be accompanying her to the Grammys this year.

Cyrus has also been busy getting ready for her Grammys performances. On her Instagram Story, the singer posted pictures of the various artists she is performing with at this year's Grammys, including Shawn Mendes, Linda Perry, Maren Morris, and the legendary Dolly Parton.

In an exclusive Grammy interview, Cyrus talked about how excited she is to perform her song "Rainbowland" with Parton, who she refers to as her fairy godmother. "We wanted to write a song that could really make a difference — that could speak to the current situation of not only our country but the world," Cyrus said about the song. "It's about being dedicated to making change."

While Both Hemsworth and Cyrus have their own successful careers, together, the two have become one of the world's most popular celebrity couples. They had been dating on-and-off for years, but they surprised fans when they announced their marriage last December. In his interview with Live With Kelly and Ryan this week, Hemsworth talked about his private wedding and how good it feels to call Cyrus his wife.

"We know how we feel about each other but we just wanted to do something simple, organic, and just basically immediate family. It was a really nice day," he said. "It's become a little bit more normal but the first couple of weeks — it's only been a month and a half or something — but the first couple of weeks was really fun to be wife and husband. I just have her in as a wife in my phone now."