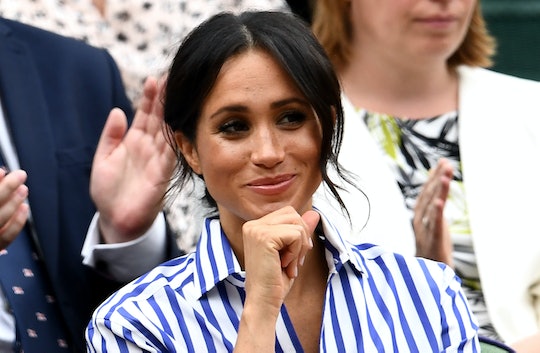 Meghan Markle Has A New Kind Of Job After 'Suits'

If you didn't know Meghan Markle, Duchess of Sussex, from her huge royal wedding, then you probably knew her from Suits, which she starred in for seven long seasons. When Season 8 premieres Wednesday night, she’ll be noticeably absent, leading some fans to wonder why Meghan Markle isn’t on Suits this season and hope that she might return someday. When she married Prince Harry, Duke of Sussex, things changed for the longtime actress and she made the decision to give up acting for good. This means that despite some fans missing Rachel Zane, paralegal extraordinaire, she will not be back to reprise her role in a surprise cameo at some point down the line.

While Meghan wasn’t forced to give up acting by any means, it just made the most sense with the new direction her life was taking as a new member of the royal family. "I don’t see it as giving anything up. I just see it as a change. It’s a new chapter," she said in a BBC interview in November 2017. "And keep in mind I’ve been working on my show for seven years. We were very fortunate to have that sort of longevity on a series. For me, once we hit the 100 episode marker, I thought, I have ticked this box and I feel really proud of the work we’ve done there and now it’s time to work as a team with [Harry]."

So just in case you were concerned that she was giving up something important to her, she seemed more than ready to move on from Suits, even if we’ll all miss her dearly.

Meghan also said in the interview that leaving acting behind her will free her up to do more charitable work that’s always been a passion for her anyway. She said that, given the reach of her voice and the fact that she can reach even more people as the Duchess of Sussex, it’s important to use that for something meaningful. Luckily, she was able to leave the show in a dignified manner and not in the middle of filming a season or on bad terms with anyone from the show.

In fact, most of her former Suits co-stars were quick to congratulate the new Duchess on her wedding to Harry. Patrick J. Adams, who played Meghan’s on-screen husband, took to Twitter to congratulate her on her engagement back in November 2017 and had only kind words for her. "Playing Meghan's television partner for the better part of a decade uniquely qualifies me to say this: Your Royal Highness, you are a lucky man and I know your long life together will be joyful, productive and hilarious. Meghan, so happy for you, friend. Much love."

Although Meghan has moved on to the U.K. and to more full-time charitable work with her new husband, that doesn't mean that she doesn't sometimes miss her former career. According to Hello, a fan spoke briefly to Meghan when the Duchess was out for a walk with Harry in Dublin earlier in July and revealed that the former actress joked about missing the USA legal drama. "I'm a fan of Suits and I said to her that I miss it and she said 'so do I'," Fiona Moore said. "[Meghan] seemed very relaxed and was joking and laughing."

Unfortunately for fans of Suits and of Meghan specifically, her time will now be better spent working on important causes and adjusting to life as someone with an official royal title. Acting, and Suits, is behind her and I think she’s going to do great things with her new life.