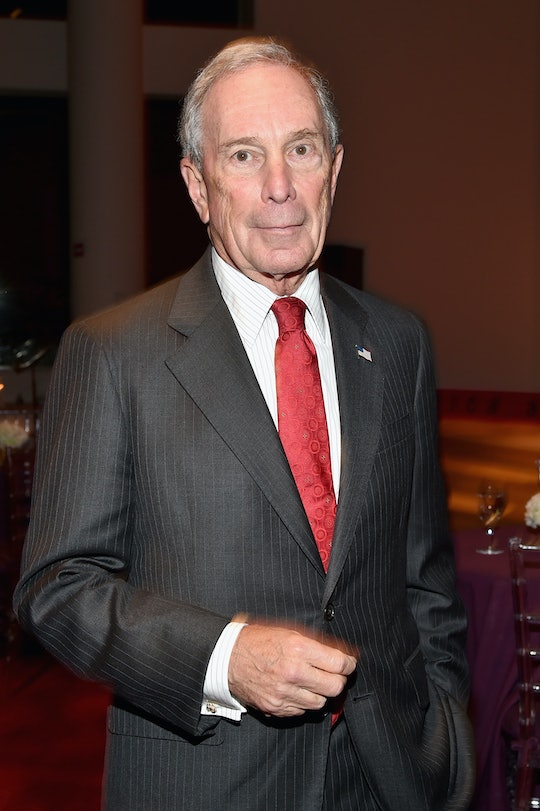 Why Isn't Michael Bloomberg Running For President? His Announcement Gives Us A Few Clues

It was over before it began. In a fascinating statement published this week at Bloomberg View, long-serving American politician and billionaire businessman Michael Bloomberg announced why he wouldn't run for president. Bloomberg had waffled back and forth about the decision in the previous weeks, but ultimately said a run at the White House was not in the cards. The impassioned statement, in which Bloomberg explained that he can't realistically win the election, ultimately amounted to an acerbic condemnation of Republican frontrunner Donald Trump.

Bloomberg, who served for 12 years as the mayor of New York City, expressed his appreciation for those that have urged him to run as an Independent, and he highlights his commitment to public service. "But when I look at the data, it’s clear to me that if I entered the race, I could not win," he wrote in the statement.

He further argued that if he had run as an Independent, it would have become a three-way race between himself and the Republican and Democratic candidates. In this scenario, Bloomberg said, "it’s unlikely any candidate would win a majority of electoral votes, and then the power to choose the president would be taken out of the hands of the American people and thrown to Congress." From there, Bloomberg explains, either the Republican or Democratic candidate would be awarded the presidency because congress would vote along party lines.

And here's where Bloomberg pivoted from a well-reasoned description of the unlikelihood of him becoming president to an all-out denunciation of former reality TV star Donald Trump, along with a condemnation of Texas Sen. Ted Cruz:

As the race stands now, with Republicans in charge of both Houses, there is a good chance that my candidacy could lead to the election of Donald Trump or Senator Ted Cruz. That is not a risk I can take in good conscience.

I have known Mr. Trump casually for many years, and we have always been on friendly terms. I even agreed to appear on “The Apprentice” -- twice. But he has run the most divisive and demagogic presidential campaign I can remember, preying on people’s prejudices and fears. Abraham Lincoln, the father of the Republican Party, appealed to our “better angels.” Trump appeals to our worst impulses.

These are truly fighting words coming from a man who was once described by New York Magazine as speaking in a "standard phlegmatic monotone." Bottom line, the man's known for his stoicism—The New Yorker once argued that he should be known as "the stoic face of leadership." Given all this, it really says something when Michael Bloomberg, the man of the unemotional facade, comes out with such pizazz against Trump.

And it's not like Bloomberg is one to eschew the opportunity for power. Indeed, The New York Times reported that the real estate billionaire has spent the past several months laying "the groundwork" for a presidential bid, setting up the details of a "long-shot billion-dollar campaign that would have subjected his image to a scorching political test." According to The Times, Bloomberg and his advisors even conducted polls in 22 states, set up a website, and produced campaign ads.

It's somewhat ironic that Bloomberg is bowing out of the race under the rationale that his presence might result in Congress—not the American voters—selecting the next president. It was Bloomberg, after all, who won the third term of his NYC mayorship by reportedly shady means. In 2009, when Bloomberg's second term was coming to an end, he repealed the law that placed a limit of two terms on the mayorship. According to The Wall Street Journal, this was "the most controversial move" of Bloomberg's mayoral tenure.

And now, this same Michael Bloomberg is bowing out of an election because he fears it won't be left in the hands of voters. Fair enough, though The New York Times characterizes the situation thusly:

Torn between his aspiration and a mountain of data showing that the path for an independent campaign aimed at the political center was slim and narrowing, Mr. Bloomberg, 74, ultimately abandoned what would probably have been his last chance to run for the White House.

Still, the heightened rhetoric of Bloomberg's statement does suggest that his disdain for Trump is real, and that he legitimately doesn't want to risk being at fault for a Trump presidency. He even goes so far as to characterize both Trump and Cruz as candidates who would "weaken our unity and darken our future" if elected.