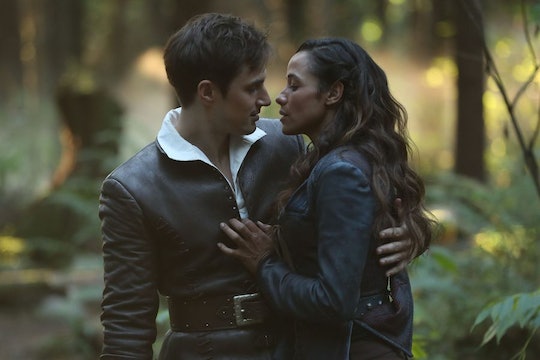 'Once Upon A Time' Will Be Back Before You Know It

Bad news Oncers! Even though it's Friday, there's no new episode of Once Upon a Time this week. So why isn't Once Upon a Time on tonight? The show is taking a break for the holidays. For the next three weeks, there will be no new episodes of Once Upon a Time. Instead, tonight you can watch Santa Clause Is Comin' to Town and the following Friday the two-hour Season 5 premiere of Marvel's Agents of S.H.I.E.L.D. will air. It's unclear what will air the following Friday after that, but unfortunately there still won't be a new episode of OUAT coming your way. Thankfully, last week's episode was a big two-hour event, so that gave fans a lot to think about for the next few weeks considering the fact that so much happened.

After Regina was awakened from the curse and Drizella/Ivy explained if the curse was broken horrible things would happen to the people Regina loved, Regina was hard at work trying to keep Jacinda and Henry apart. She convinced Jacinda, who was trying to get custoday of her daughter, it wouldn't look good for her if she was spending all her time with her boyfriend at her new job. Even so, Regina was still determined to keep Drizella away from Henry as well, but someone new arrived to come between the star-crossed lovers.

A lawyer named Nick arrived at Roni's to help Jacinda try to get her daughter, Lucy, back. But Nick isn't just an attorney; he's also supposedly Lucy's father, which can't be legit since Lucy's dad is obviously Henry... right? Honestly, it's getting really hard to know what's really going on in this show. Regardless, Nick's arrival made Henry feel even more sure that he's not Lucy's dad and that he should probably stop pursuing a relationship with Jacinda, much to my disappointment.

However, it seems Regina may have a plan. After testing Rumple to see if he was also "awake" in the cursed world that is Hyperion Heights, and getting no kind of positive response from him, she has decided to go on a road trip, and she's taking Henry with her. The mother/son pair are headed off to San Francisco, CA to find someone who can help them — someone who apparently kind of hates Regina. Truthfully, that could be anyone, so it'll be interesting to see who's waiting for Regina and Henry there.

Besides that, the two part episode also included a number of other revelations. For one, Hook's daughter was finally revealed to be Alice, but the circumstances in which she was conceived were not pleasant at all. Hook was tricked into sleeping with Mother Gothel, who had disguised herself as Rapunzel. Mother Gothel then left the baby in the tower so she could escape and Hook selflessly gave up his life at sea to raise the baby. Not that he nor Alice remember this as they live their cursed lives in Hyperion Heights. Still, at least fans now know the truth.

The most shocking part of the episode was probably the end though. When Drizella and Mother Gothel found the coffin in which Drizella's sister Anastasia was in, they learned that it was actually empty. So where is Anastasia? It's possible her mother, Lady Tremaine/Vicky, took her, which means fans will probably be seeing her again soon.

So there's definitely a lot to look forward to when Once Upon a Time finally returns, but for now you can use this extended break to rewatch or catch up on this season's episodes thus far and make your own theories about what will happen next. You can see the episodes you missed on Hulu, ABC.com, and ABC on demand.