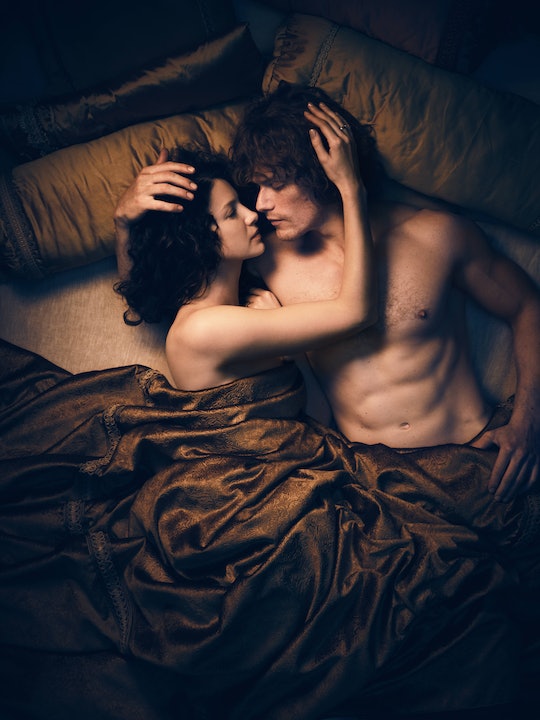 Sunday night is my favorite night of the week for the very simple reason that this is the night that Outlander comes on. If you, like me, have been waiting patiently for this extended Claire and Jamie episode with baited breath for the past year and a half, you're probably in the midst of throwing something at the TV in frustration and wondering why isn't Outlander on tonight like it usually is each week. But alas, the series is on a brief hiatus, which means we Outlandites (I just made that up) have to wait a little while longer before continuing on with Claire and Jamie's reunion.

The truth is, I do not know why Outlander is doing this to us. My instinct is to say that this is because show-creator Ron Moore is purposefully trying to torture his fans with this waiting game. In Episode 5, Roger described himself as being like "a dog with a bone," which is why he couldn't give up his Jamie research. Well right now I am a dog waiting for a treat that Moore is dangling in front of my face but refuses to throw to me even though I am sitting very patiently and being very good (has this metaphor gone on long enough? I thought so).

As if to placate Outlander fans, Starz is instead airing a marathon of the first five episodes on Sunday. So if by some chance you've missed the first half of the season, you can pour yourself a whiskey and curl up on the couch to watch all five of them in a row. I, who have already seen all five of these episodes, will probably do this anyway. I'm willing to concede that my obsession may have gotten a little bit out of control. I will not apologize for it though.

The first two seasons of the show focused almost entirely on the 18th century, tracking Claire's journey through the stones, her forced marriage, and then how she and Jamie fell very much in love. The third season started after she'd gone back through the stones to the 20th century. She did it because she and Jamie assumed that he would die in the Battle of Culloden, and she was pregnant with their child, who they wanted to protect. This means that the first half of Season 3 focused on Claire and Jamie's separate lives in the 20 years they spent apart. Neither of them were very happy with the arrangement and, frankly, neither was I.

The series finally picked up again a full year and a half after Season 2 ended with Claire finding out that Jamie survived Culloden. The break was so long that it began to be known affectionately (or angrily) as "Droughtlander." Now that it's back, no one can be particularly thrilled with this week-long mini-hiatus, right before the most anticipated episode of the season (and maybe the entire series). It is some comfort that the episode will be extended in length, and last an epic 74 minutes.

Episode 5 "Freedom and Whiskey" ended with Claire finally back in the 18th century — as everyone knew she would be — and locking eyes with Jamie for the first time in 20 years. Jamie promptly fainted at the sight of her, which is ironically what I did when I watched that scene. It was great fun to watch their facial expressions but not nearly satisfying enough. Luckily, based on the agonizingly short 30-second preview for Episode 6 "A. Malcolm," the rest of the reunion will be very satisfying (and yes, I do mean that in a sexual way). Are you excited? I am excited. And impatient. Oct. 22 cannot get here soon enough.