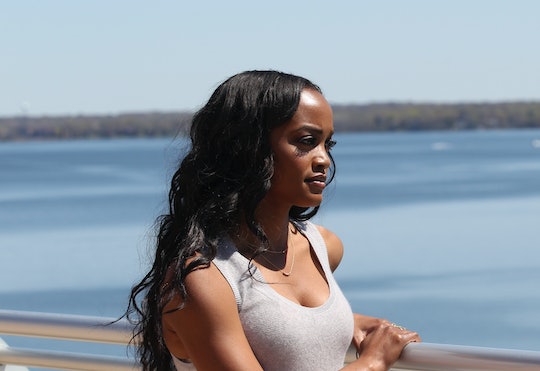 Rachel's Dad Was MIA On 'The Bachelorette'

Bachelor Nation has withstood mud wrestling, feuds, and Adam Jr., and it's come to this: the top three. In addition to the fantasy suites, the remaining men come to Dallas to meet Rachel's family. First up was Peter, who got the chance to speak to Rachel's mother, siblings, and in-laws, but one person was noticeably absent: her father. The same thing occurred during her hometown date on The Bachelor. Rachel, though, is reportedly close to her father. Why isn't Rachel's dad meeting the men on The Bachelorette? There's a reason the self-proclaimed daddy's girl doesn't mind.

Rachel took after her father in terms of profession. Not only is he a fellow lawyer, but he's a federal judge. Judge Sam Lindsay was appointed by then-President Clinton in 1997 (and yes, he has his own Wikipedia page). When it came to Rachel's hometowns last Bachelor season, Judge Lindsay did not appear on the show. Nick, however, tweeted that he met him off-camera. At the time, a "source" told Us that he had a business conflict during filming, which is why he didn't appear. "He legitimately had business during the hometown date with Nick," the source said. "He has nothing against the show, so he will definitely be part of The Bachelorette season."

In an interview Chris Harrison gave Entertainment Weekly in May, however, he said that wouldn't be the case. "With his job and what he does, he just can’t," he said. "He was a big part of the show but off-camera." According to Harrison, Judge Lindsay's job changed some elements of production. "We had to do some things in Dallas and kind of switch things around a little bit because he plays such a big part in her life and family’s such a big part," he continued. "We wanted to include that even if we couldn’t show some of it on television."

So despite Rachel's relationship with her father – and the fact that he inspired her career – he wasn't able to appear on the show due to his position. Rachel and her family made a point, though, to emphasize that her parents have been married for 38 years. That's one reason Rachel wants to fall in love and get married: to share a bond that her parents share. Bachelor Nation will have to watch until the end to see if her dream becomes realized, but they can be assured that her father was a part of the journey – even if only off-camera.