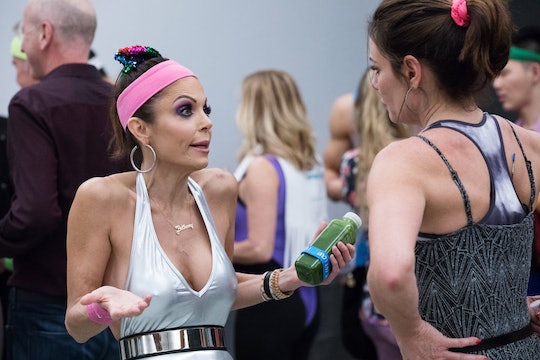 The Real Housewives of New York City fans who patiently await the thrilling conclusion of the three-part, cocktail-soaked trip to Miami will have to wait a little while longer for it, since Real Housewives Of New York City isn't on tonight due to a change in schedule at Bravo. So you'll want to adjust your RHONY viewing parties accordingly.

Beginning Thursday, Jun. 20, RHONY will switch to airing on Thursday nights at 9pm ET. That means subsequent episodes of Season 11 will air on Thursday, Jun. 27, skip Jul. 4 for the holiday, and then return with Part 1 of the reunion show on Jul. 11. Parts 2 and 3 of the reunion with proceed on Thursday nights thereafter. RHONY's Wednesday night time slot will be taken over by new episodes of Southern Charm Season 6, which had previously been sharing Wednesday nights with RHONY in the 8pm timeslot. It's unclear what prompted the switch, but my guess is that Bravo wanted to separate two of its most popular franchises to dominate viewership in the all-important 9pm primetime slot more nights out of the week.

So worry not, RHONY fans; the Housewives are still going strong this season, just on a different night. And even though there are only two episodes left before the reunion, another peek at the midseason trailer reveals what viewers have yet to see this season.

For starters there's Dorinda Medley's '80s-inspired workout class, which she hosts on behalf of Live Out Loud, an LGBTQ+ youth nonprofit dedicated to connecting young people with queer elders for professional and personal mentorship. All the ladies join her, donning incredible spandex ensembles (and a breakout-inducing amount of '80s makeup for an aerobics class, TBH) in the Jun. 20 episode. A sneak peek clip shows it going fabulously well, and Dorinda even jokes that she might give Luann's cabaret a run for its money and take the class on the road.

Then, there's the remainder of the Miami trip, where Tinsley Mortimer shrugs off her trademark modest fashion sense and flashes the group after Ramona Singer drags her outfit. Tinz shoots back that her 'fit cost a smooth $3000, prompting Dorinda to wonder in a confessional interview how the math behind Tinsley's wardrobe works.

The ladies also take a pottery class together that quickly turns phallic and celebrate Christmas in what looks like a shopping center with a lot of shirtless models around, for some reason. Luann de Lesseps can be seen recording a new single, which fans have to look forward to, and Dorinda has a tense phone conversation with an unknown caller. She can be heard saying, "Don't run game behind my back, because you will lose me," which sure sounds an awful lot like she's talking to her boyfriend John Mahdessian, but viewers will have to wait to find out exactly what happened.

There are still plenty of juicy RHONY moments left to see this season, and the reunion show this year is bound to be more explosive than ever. You can stay tuned into Bravo on Thursday nights to find out how it all goes down.