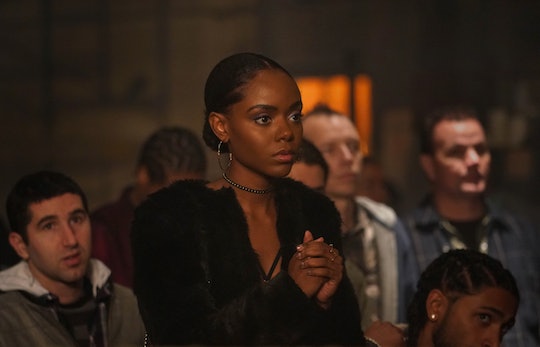 Fans Can't Wait To Dive Into A New Episode Of 'Riverdale'

Season 3 of Riverdale keeps getting better, and after the jaw-dropping Feb. 6 “Bizzarodale” episode, fans can’t wait to see what happens next. But last week, instead of bringing fans a new installment of Riverdale, The CW aired a rerun of “The Midnight Club” episode, and this week it they’re airing a rerun of “The Man in Black.” So why isn’t Riverdale on tonight with a new episode?

Unfortunately, fans aren’t getting a new episode of Riverdale until Feb. 27, and the network hasn’t provided a reason for the show’s three-week hiatus. There are no major TV events airing in its place, so it’s quite possible that the season was just scheduled out this way. Waiting a few weeks for a new episode might be annoying, but at least you're getting a couple of exciting reruns in its place.

The last episode of Riverdale had a ton of cliffhangers, which is why fans are so anxious to get back on board. After Moose and Kevin took their relationship to the next level, Moose’s dad, Major Mason, swooped in to ruin the day. Not only did he lure the Riverdale parents into finishing their Midnight Club game of Gryphon and Gargoyles, he dressed up as the Gargoyle King and had Moose and Kevin kidnapped. When questioned by new sheriff, FP Jones, Major Mason revealed that he had feelings for Tom Keller (not Sierra) when he was a teen, and his parents sent him to the Sisters of Quiet Mercy for conversion therapy. He said he kidnapped Moose and Kevin because he wanted to scare them straight, literally. Because of his dad’s sordid antics, Moose was sent away to live with his aunt in Glendale. But will Moose ever come back?

Jughead’s family left fans with another cliffhanger in “Bizzarodale.” It turns out that Hermione’s drug business buyer is Gladys Jones, and she means business. When she meets Reggie and Veronica to get her payment, the two teens tell her they don’t have all the cash on hand. Gladys sets up a deal to launder money through Reggie’s family car dealership and takes Reggie’s car as collateral. It turns out thatMama Jones and Jellybean are partners in crime, but Jughead and FP have no idea what they're up to. Gladys makes Veronica and Reggie vow to keep the deal a secret, especially from Jughead.

Archie wasn’t a huge part of the last episode, but he did give fans the kiss they’ve been waiting for since Season 1. When Archie finds Josie crying in the school’s music room, upset over her breakup with Sweet Pea and nervous about her audition with Juilliard, he steps in to make her feel better. He drives Josie to her audition, and later, when she tells him she didn’t make it to callbacks, he sings a romantic duet with her, offers to be her date for Tom and Sierra’s wedding, and then the two finally kiss. Sorry Varchie shippers, you may not like it, but this kiss was a long time coming.

With so much going on in Riverdale, it’s no wonder fans are anxious to dive back in. Luckily, the next new episode — “Requiem for a Welterweight” — is just two weeks away.

Riverdale returns with new episodes on Wednesday, Feb. 27 at 8 p.m. ET on the CW.