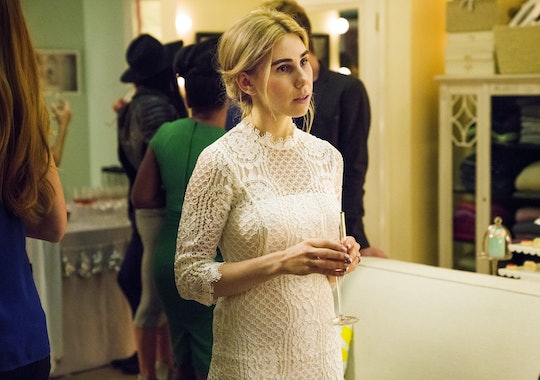 Shoshanna Will Be MIA In The 'Girls' Finale

The Girls series finale seems poised to focus on Hannah giving birth and starting her new life as a professor at a small liberal arts college in upstate New York. We know from production stills that Marnie and Loreen join her in the finale, but what about the rest of the girls? In the episode before the finale, titled "Goodbye Tour," fans see all of them reunite, barely, at Shoshanna's engagement party — a fête Hannah wasn't even invited to. So why isn't Shoshanna in the Girls finale? It turns out the engagement party was the last time we'll see Shosh or Jessa on the show.

Girls creator Lena Dunham has been penning wistful goodbye posts on Instagram all season long using behind the scenes photos of the entire Girls family. On Monday, she posted the news that "Goodbye Tour" was Zosia Mamet and Jemima Kirke's last episode, before later deleting the post. (Guess not everyone was so happy about that particular spoiler getting leaked.)

"From the first day we paired them together in fall 2010, we knew these two TV cousins had something kinetic," Dunham wrote in the post. "And it’s true — even when they were battling, Jessa & Shoshanna had this insane Hepburn/Tracy Laverne/Shirley energy that just made us laugh so hard and feel so much. Last night was their final episode of Girls. No words for how we’ll miss writing for them, watching them, working alongside them."

So it's official: Shoshanna's engagement party was her character's happy ending. Ironically, Shoshanna is the character who, historically, focused least on her romantic life. She was always much more career-focused and professionally cunning than Hannah, Marnie, or Jessa.

While all the girls had lofty ambitions throughout the series — Hannah as a writer-then-teacher, Marnie as a gallery curator-then-musician, Jessa as a therapist-then-filmmaker — Shoshanna seemed to be the one who always kept her nose to the grindstone and made slow, perhaps boring at times, but methodical progress towards the career she envisioned for herself. Hannah, Marnie, and Jessa all suffered from sudden bursts of intense passion and productivity for a new professional project, followed by a sputtering out of energy. Shosh was the only one who ever kept her focus.

It's an unexpected choice, then, for her happily-ever-after to be a romantic one instead of a professional accomplishment — an engagement party instead of, say, a promotion at her dream job, or being the marketing force behind a start-up that just took off. But perhaps it means we never had to worry about Shoshanna's career in the first place. She'll always have the drive and the know-how to get what she wants professionally. For her, a supportive partnership was the big question mark in her future, and Dunham gave us its answer.