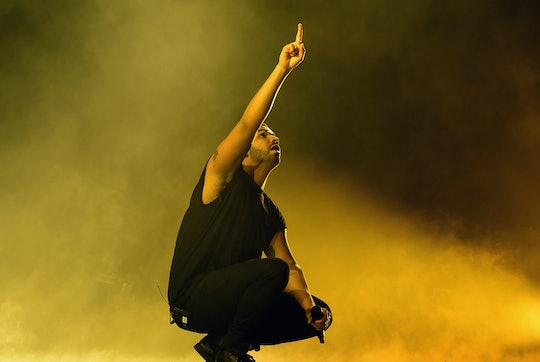 Why Isn’t 'Summer Sixteen' On ‘Views’? Drake Might Be Dropping A Few Hints

Last week, Drake released his latest album, Views — formerly called Views from the 6. And while the album is being well-received, and many were thrilled to see — and listen to — 20 new songs, it was what they didn't hear that was most shocking. Drake’s latest single, “Summer Sixteen,” was missing. (Like missing, missing.) And while many artists release singles ahead of their albums, it is almost unheard of for an artist to not include a previously released single in their new collection. So why isn’t “Summer Sixteen” on Views?

The truth is, no one knows, as Drake has yet to offer any additional information or drop even the smallest of hints. However, his silence is driving fans wild — especially since Drake’s upcoming tour is named the “Summer Sixteen Tour” and several songs slated to appear on the new album were missing, including "Back To Back," "Can I," and "Right Hand." This means the internet is abuzz with chatter, and many fans have been left to come up with their own theories. But, some speculate that Drake just didn't have enough space on the new album. I mean, 20 songs is a lot. So he may have just released those songs as creative warmups, or maybe they will be included on another album that's coming soon (!). After all, he is an artist, and sometimes artists don't have clear reasons for their creative decisions.

But, if an entire additional album came out after Views, fans would certainly lose it.

Drake originally released "Summer Sixteen" in January and announced that Views would be out in April. Drake's Summer Sixteen Tour will start July 20 in Austin, Texas, and will continue across the U.S. and Canada, according to Rap-Up. Aside from Drake, Future will be the other tour headliner. The two will be joined by Roy Wood$, dvsn, and other guests who Drake hasn't announced just yet.

Views dropped on Friday, and even without “Summer Sixteen” the album is being hailed a success, as Views has been streamed more than 250 million times — and in less than a week, according to The Verge. The album is only available on iTunes and Apple music.