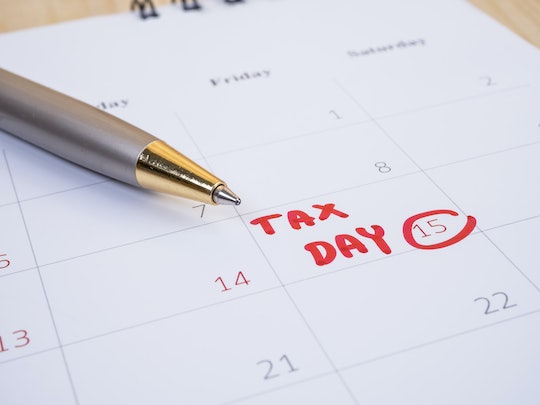 Tax Day Has Moved This Year & Here’s Why

Tax season is in full swing and, for some, it means a little more cha-ching in their pockets. But for others, tax season is just another added stressor that needs to end as soon as it begins. Though the timeframe for tax season is the same every year, the April 15 deadline always seems to sneak up on filers and leave them in a frenzy to do some last-minute filing. However, this year's tax deadline is on April 18 instead. Having the extra days are relief for many, but it leads them to wonder why isn't tax day April 15 this year?

Now of course, I'm not one to complain about having a few extra days to get financial paperwork sorted out on my end. But it's important to know why things change, especially if they've been one way for so long. As long as I can remember, the tax deadline has been on April 15. And I'm sure many others are still thinking that this is the deadline this year. However, Vox noted that if April 15 lands on a weekend, the deadline is automatically pushed to the next operating day of business. If you're like me and went directly to a calendar, your next question was probably, "then whey isn't the deadline Monday, April 17?"

According to the site, the only other time that the deadline changes is if it falls on a federal holiday or a holiday celebrated in Washington, D.C. In this particular case, Emancipation Day — which is usually celebrated on April 16 in Washington, D.C. — is observed on Monday, April 17, making the next business day (and tax deadline date) April 18.

If you're not a resident to D.C., Emancipation Day may sound like a foreign day to you, but it's actually super significant. Marking the day Congress passed the law to end slavery in Washington in 1862, Emancipation Day happened eight months before the actual signing of the Emancipation Proclamation and has been a public holiday in D.C. since 2005, Time and Date noted.

Although the holiday is only celebrated in D.C. its effects are worldwide and are the cause of you having an extra three days to file your taxes this year. So, procrastinators rejoice and use your three days wisely.