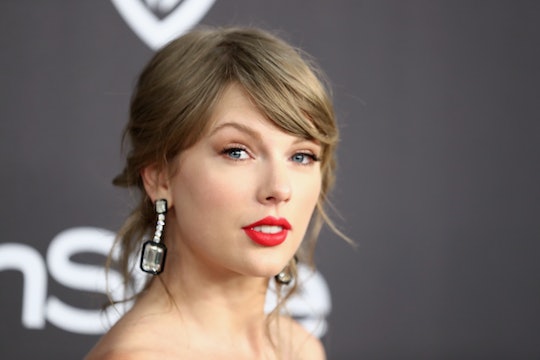 Taylor Swift Was MIA At The 2019 Grammys, But She Had A Good Excuse

A few familiar faces were noticeably missing from the 2019 Grammy Awards in Los Angeles tonight, and while some shared their alternate plans with the media and fans on Sunday, many are likely wondering why Taylor Swift isn't at the Grammys this year. With her hit album Reputation dominating the radio last year, it was definitely surprising to not see her on the red carpet.

While most Americans are glued to their TV screens during the Grammys, another awards ceremony took place on the same day across the pond. Swift wasn't expected to be at the 2019 Grammys, according to E! News, but she wasn't just sitting at home with her cats. In fact, Swift was reportedly seen after the 2019 BAFTA Film Awards, miles and miles away in London, with her boyfriend, actor Joe Alwyn, according to Entertainment Tonight. E! News reported that photographers spotted the couple together at a "post-awards dinner party."

Although 29-year-old Swift didn't pose on the red carpet with 27-year-old Alwyn, according to Entertainment Tonight, she was reportedly inside the BAFTAs, where her English beau took home a whopping seven awards for his movie, The Favourite.

Alywn and Swift have been an item for years now, as Cosmopolitan outlined, but they seem to like to keep their relationship out of the public eye. However, on Sunday over in England, the Daily Mail reported that the two were taking part in a little PDA at the afterparty. In fact, according to People, executive editor at The Sun, Dan Wootton, spotted the couple at the party, where they were seen "getting affectionate." Oo la la.

Attending the BAFTAs with Alwyn wasn't Swift's only reason for skipping out of the 2019 Grammys; E! News previously reported that the Reputation star has been filming in London for her role in the upcoming movie adaptation of Cats, in which she plays Bombalurina.

It was a bit of a bummer to learn that Swift wouldn't be at the 2019 Grammys since she was nominated for a pretty big award: Best Pop Vocal Album for Reputation, according to Variety. She ended up not winning this year, but Swift was up against some stiff competition for Best Pop Vocal Album. According to People, although she also did not attend the ceremony, Ariana Grande ended up taking home the award for her fourth studio album, Sweetener.

Starting her appearances at the annual award show in 2009 when she performed "Fifteen" with Miley Cyrus, Swift is certainly no stranger to Grammys nominations and wins. In fact, according to the Recording Academy, she is "one of only two female solo artists, along with Adele, to win Album Of The Year twice for her solo recordings." In 2010, Swift took home the award for Fearless and in 2015 she won the coveted award for 1989.

While losing isn't the most fun thing in the world, especially at the Grammys, it's probably safe to assume that Swift is doing just fine right now. She's in England. She's with her man Joe Alwyn. She's working on her own projects. She's winning in more ways than one.