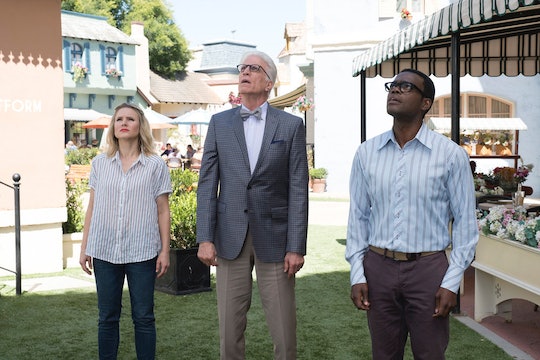 'The Good Place' Has Some Bad News For Fans

So far, Season 2 of The Good Place has been filled with action, especially since Janet started melting down and creating people. Which is exactly why you might wondering why The Good Place isn't on tonight. It turns out that last week's episode "Derek," was the fall finale. According to TVLine, all of NBC's Thursday shows are getting bumped so that the network can take its turn at showing NFL's Thursday Night Football coverage until Dec. 14. So yes, we have sports to thank for this unfortunate hiatus.

But there's some additional bad news for anyone dying to check in on Eleanor and Chidi: The Good Place isn't coming back until early 2018 — Thursday, Jan. 4 at 8:30 p.m. EST, to be exact. (I know, I'm bummed too.) Meanwhile, Will & Grace and Superstore, the other Thursday night shows, will have holiday episodes on Dec. 5. So you won't have to wait quite as long for some of your favorites to return.

Still, it's not going to be easy to wait for The Good Place to come back, especially since the fall finale ended with yet another cliffhanger. The very last scene was Shawn, the head boss, calling Michael into his office to talk. He asked Michael to, "shut the door, have a seat" just before the episode closed, which can only mean bad news for Eleanor & Co.

Remember, Shawn thinks that Michael's only given the group one reboot so far after they figured out the plan at the end of Season 1. But, as viewers know, Michael ended up rebooting them like, 1.000 times, only to finally stop doing it and make a pact with Eleanor, Chidi, Jason, and Tahani to just "pretend" that they're being tortured in the Good Place which is actually the Bad Place.

So what does it mean that Shawn is back? He might know what Michael is up to and plans on sending them all to the actual, OG Bad Place, which would be pretty terrible. I'd much rather watch them deal with their ethical dilemmas while also reconciling with clam chowder fountains and frozen yogurt.

But also, the whole idea that they are working with Michael to help become a better demon is so good. Why ruin it now? We'll all just have to wait and see.

The good news is that fans can totally trust show creator Michael Schur, who apparently knew of the original twist even before he pitched the show. He told Ted Danson and Kristen Bell before signing them onto to the show, but not everyone else. They were totally in the dark. Schur said in an interview with Uproxx this year:

Toward the end of the year we all gathered and I filled them in — Kristen actually took a video of them as I pitched the twist. It’s pretty great. And the fact that none of them had guessed it made me feel like we might be able to get all the way to the end without the truth revealing itself to the viewing audience at large.

Schur and Danson even used a code on set to talk about what Michael was saying to the characters and what he was really doing to the gang. So yes, every single "clue" you thought you found in Season 1 that led you to know the Good Place was really the Bad Place was actually in there on purpose.

It's going to be a long, long holiday season without The Good Place, but it's bound to get even better when it comes back in January 2018.