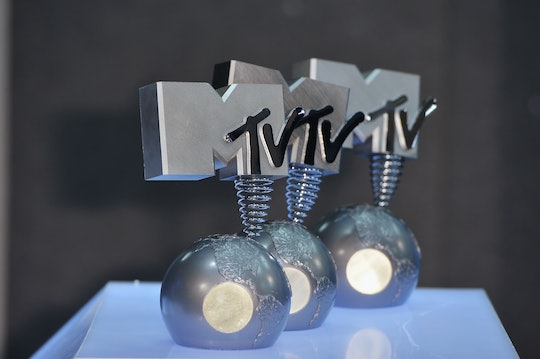 Why Isn't There A Host At This Year's MTV VMAs? MTV Is Trying Something New

The 2016 MTV Video Music Awards (VMAs) will take place on Sunday August 28th at New York City's iconic Madison Square Garden. It's going to be an exciting night filled with all-star performances from Ariana Grande, The Chainsmokers featuring Halsey, and Nick Jonas. It's always fun to read about who's been nominated, who was snubbed (looking at you, Taylor Swift), who's feuding with who, and who will host the event. MTV has also had an impressive run of hosts in past years, including Miley Cyrus, Jimmy Fallon, and Russell Brand. This year, though, MTV decided to try something a little different: There isn't going to be a host at the 2016 MTV VMAs. Instead, MTV enlisted some of its famous friends to be correspondents at the show.

The show will start off with a major key. And by major key, I mean DJ Khaled. The DJ/producer and Snapchat aficionado is set to be one of the correspondents taking part in the VMAs. Khaled is going to host the pre-show with Charlamagne Tha God and Lizzo from MTV's Wonderland, as well as report from the sky box at MSG throughout the night. Khaled told Billboard Magazine how amped he is to be a part of the pre show. He told the magazine, as modest as ever, that viewers should "expect nothing but greatness and also expect the unexpected because when you got Khaled on the bill, ratings go extra high." Khaled even remixed the show's theme song, "Do Your Thing" by Charles Wright and the Watts 103rd Street Rhythm Band to get his fans hyped for the show.

The comedy duo Key & Peele will also join DJ Khaled at the VMAs. The duo will serve as masters of ceremony for the evening and offer play by play commentary on the night's events. The pair will sit behind a desk almost as though they're sports commentators covering a big game. Knowing Key & Peele, they're sure to add a new, hilarious edge to a show audiences have come to know so well over the years. It will also be awesome to see the duo back together after their beloved Comedy Central show came to an end last year.

Comedians Jay Pharaoh and Nicole Byer will round out the group as correspondents for the main show. They'll be out in the audience interacting with guests and fans. My stomach already hurts just thinking about how much I'm going to be laughing on Sunday.

Having multiple correspondents covering the VMAs instead of one host is certainly a change for the infamous award show. The decision to make the switch was inspired by how recent television events, such as the Olympics and the presidential conventions, were covered. VMAs Executive Producer Jesse Ignjatovic told Entertainment Weekly that MTV aims to reflect what is happening in the world. The group of correspondents "felt like a unique approach to the show."

I can't wait to see how having multiple hosts work out at this year's VMAs. I'll definitely be tuning in to check out Key & Peele, DJ Khaled, and the rest of the correspondents as they take over the big show.