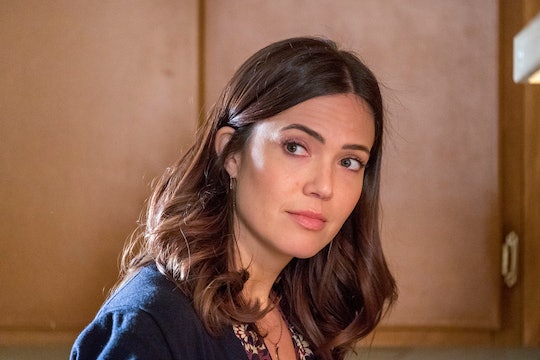 Here's Why You Won't Be Seeing 'This Is Us' Tonight

After a long winter hiatus, This Is Us finally returned to NBC on Jan. 15 for its midseason premiere. But now, just two weeks later, fans are stuck with yet another break in programming, this time smack in the middle of a two-part episode. So why isn't This Is Us on tonight? The break may extend into next week as well, and strangely enough, the government shutdown is to blame.

Networks, including NBC, were prepared to take a break in regularly scheduled programming on Tuesday, Jan. 29 to air the State of the Union address instead. So This Is Us was never scheduled to air tonight and production, accordingly, took a break. Unfortunately, due to the unprecedented 35-day government shutdown over President Trump's proposed $5 billion border wall, House Speaker Nancy Pelosi canceled the State of the Union, according to the Washington Post, refusing to allow it to take place on the House floor. Since government workers' pay had been frozen during the shutdown, Pelosi worried that taking adequate security measures for such an event would be impossible, and rather than risk putting all the heads of state in one severely under-protected room, she opted instead to cancel the State of the Union until the government was back up and running. The shutdown finally ended on Friday, according to the New York Times, but the approved budget will only keep things running for three weeks. Then, another deal must be struck or the country is stuck doing this all over again.

Sadly, this does not bode well for This Is Us fans. Following the government's reopening, Pelosi re-extended the invitation for Trump to give his State of the Union address on Feb. 5, which means that This Is Us' regularly scheduled timeslot is in jeopardy yet again. As of right now, NBC's primetime schedule on Feb. 5 appears normal, but I would expect that to change as networks prepare to cover the belated State of the Union next Tuesday.

Particularly frustrating is that This is Us left off on a cliffhanger in the middle of a two-part episode on Tuesday, Jan. 22. "Songbird Road: Part 1" finds the Big Three retracing their father's footsteps to meet their Uncle Nicky, a Vietnam War vet who, for their entire lives, they believed to be dead. Nicky recounts what actually happened in Vietnam — and why Jack told his wife and children his brother had died there — and it's not a pleasant story. Though Nicky eventually sends his niece and nephews off, Kevin soon turns the car around and goes back for Nicky — unlike his father who never did. What he finds when he returns to the trailer in Bradford, Pennsylvania is Nicky sitting in front of a table with a gun on it, clearly contemplating something dark. The episode ends precariously, with Kevin's hand on Nicky's shoulder.

"Next week is pretty intense, also," executive producer Elizabeth Berger told Entertainment Weekly of the upcoming episode. "It’s a direct continuation of this, so we’ll pick up with the hand on the shoulder — exactly where we left off — and we’ll see how the Big Three try to bring their uncle back from the edge. And that involves Rebecca in a big way."

As for when fans will actually get to see "Songbird Road: Part 2," it looks like they'll just have to keep being patient for now.