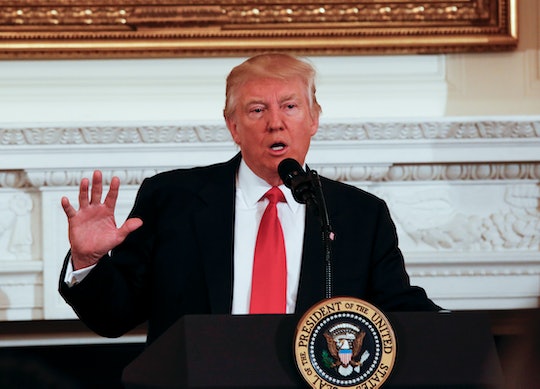 Why Isn't Trump's Speech A State Of The Union?

The president is set to speak on Tuesday at 9 p.m. Eastern Time.

However, Trump's Joint Address to Congress will likely serve a similar function as the State of the Union would, as a reflection of Trump's first month in office and a list of goals for the future of the country under his administration. The previous five presidents have made similar speeches that weren't called State of the Unions within their first few months in office, so this is not actually unprecedented, according to the American Presidency Project.

"One can expect the president to put forth a detailed and deliberative recitation of the many things he’s accomplished in the first 40 days,” Politico reported Kellyanne Conway, Trump's White House adviser, said in an interview. “He’s his own best spokesperson and messenger in terms of [outlining] completely the list of achievements that are either largely ignored or unknown."

The accomplishments listed on the White House event page include restoring energy projects including the Keystone XL and Dakota Access pipelines, and building his Cabinet. The speech is likely important to Trump because, as Conway noted, Trump believes the "dishonest" media don't report the good things that his administration has accomplished.

Trump has even taken to Twitter to list one of those accomplishments: the national deficit decreasing by $12 billion during his first month of presidency. But, as many economists have noted, that change actually has nothing to do with Trump, because the federal government is still running under President Barack Obama's budget, Business Insider reported.

In a press briefing, Press Secretary Sean Spicer hinted at what Trump will talk about during the speech.

I think he’s going to lay out his vision and talk about things like education and healthcare and infrastructure, the problems that we face as a country, the violence in some of our inner cities, but also some of the solutions that we can act on and some of the partnerships that we can create.

It's unclear how detailed Trump will get in his address, but the American public probably knows where Trump stands on inner city violence at this point. The Trump Administration also released information about plans for the budget, which will be discussed further at the address, CNN reported.

Spicer added that the speech will be "a very strong blueprint of where he wants to take this country."

Over at Forbes, writer Bill Whalen wrote he wants to hear Trump talk "timetables and specifics" in this speech. But don't expect much.

"I think you’re going to see him try to talk about policies in a broad sense of where he wants to take this country and what defining success is, what that goal means," Spicer said at the press briefing.

So this may end up being more of the same, because most of what we've gotten from Trump concerning education and healthcare reform has been "broad."