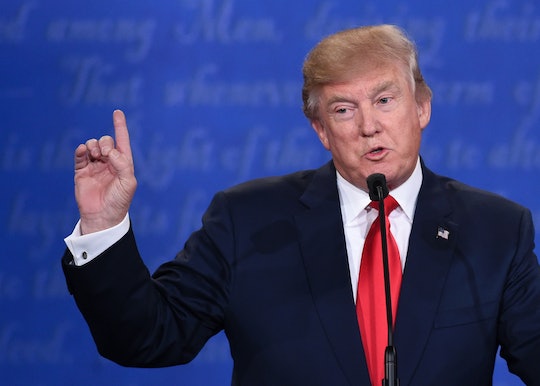 Why Isn’t Trump Sniffing At The Last Debate? Some Things Actually Do, And Can, Change

During the last two presidential debates, the only thing more common than Republican presidential candidate Donald Trump's interjecting his opponent, Hillary Clinton, was his sniffing. During the debates, Trump would consistently and rapidly inhale into his microphone, which many viewers noticed. However, at the last and final debate, Trump's sniff was absent. So why isn't Trump sniffing at the last debate? He could have gotten over a cold or he could have learned how to debate more efficiently — whatever the case may be, the sniff is gone and viewers are noticing.

Trump's sniff is practically famous (or infamous, depending on how you look at it). After the first debate, thousands of people — including politicians and celebrities — were talking about it. Hell, it even has its own parody account on Twitter that live tweets every time Trump sniffs. Unfortunately, however, it did not appear for a while during the debate.

Trump started off his final debate appearance at University of Nevada, Las Vegas pretty composed with a question about the Supreme Court. His voice was in a much lower register than normal but, of course, he was just getting started. Trump continued to raise his voice and even appeared to get mad at Clinton — but he didn't sniff. According to Twitter, it took 15 minutes into the debate for Trump to make his first sniff of the night and, after that, it went all downhill from there. Twitter users reacted accordingly because the internet is how we get through these political debates these days.

While his sniffing habit was more refined than in the previous debates, it became prominent during the times that Trump was stressed out or forced to answer a serious question (see: his talk about border patrol and Mexico). But just three debates later, there has not been any official reasoning for why Trump sniffs during the debates, and definitely not during his other televised appearances or speeches during his rallies.

While his sniffing does remain a mystery, many people have speculated as to why Trump sniffs during the debate. (And make no mistake, speculate is the key word here.) The theories and speculations vary and, in the end, they are just theories. Forbes lists a number of these theories behind the sniffing — from allergies, to Trump having a cold, to even it being a nervous habit or stress response. But Trump's lack of sniffing could have been due to debate preparation. According to ABC News, Trump had been preparing for the debate by meeting with his supporters, but they did not say if Trump had been working on his sniffing habit during this time. Some mysteries, it seems, are best left unsolved.