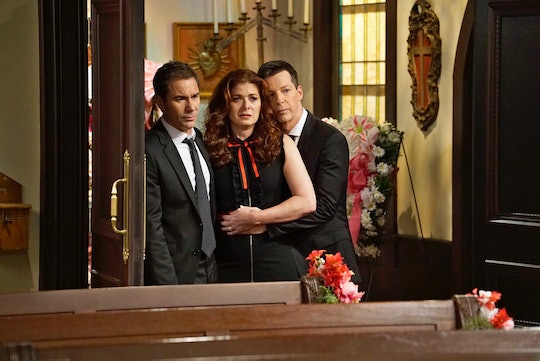 'Will & Grace' Is Taking A Short Break

I know what you're thinking. It's Thursday night. You've just gotten home from a long day of work, and you're ready to snuggle up on the couch with a glass of wine and maybe some popcorn to watch Jack, Karen, Grace, and Will. And then, horror of horrors, you're confronted with football instead. So why isn't Will & Grace on tonight? Did it ever really come back? Was it all just some sort of crazed nostalgic fever dream you imagined out of pure need? Well fret not, because the show has only taken a short hiatus and will return soon.

Like many network shows, Will & Grace has gone on hiatus for most of November but it will indeed be returning in the very near future. The reboot was not all a dream, I promise you. For this month, Will & Grace will be leaving TV to make way for NBC's Thursday Night Football which will run from November 9 through December 14. I can only imagine that the stars of Will & Grace would be as bewildered and irritated by this switch up as the fans of the show are. Personally, I have never enjoyed or understood the game, a fact I now wear as a badge of honor because I'm like that.

The season paused after Episode 6, which was entitled "Rosario's Quincineara." In a tragic episode, the gang put Rosario — fan-favorite character and Karen's tough, put-upon maid — to rest. The actress who plays the character, Shelley Morrison, has decided to retire. She hasn't been seen on screen since 2006, the year that Will & Grace left the air, and it looks like that is a decision she has decided to stick with. As reported in The Hollywood Reporter co-creator Max Mutchnick said of the actress's decision and her part in the show: "We really wanted Shelley to be a part of this series, so we find ourselves having to figure that out moving forward. It was not an easy decision to make, but it's one that she made."

Though Rosario will be very much missed in the show going forward, the series intends to pick right back up — though I honestly have no idea how Karen is going to survive without her dear employee and closest friend. Is she just going to have to do her own cooking and cleaning and shopping now? The series returns after a relatively short break on Tuesday (not Thursday), December 5 at its usual time of 9 p.m. EST. This episode is going to be a special, holiday-themed episode which I cannot wait to see. However, it is still unclear whether the show will be back for good at this time, or if it's just a one-off before the winter hiatus goes into full swing.

What is clear is that the Will & Grace reboot has gone off better, frankly, than it had any right to do. Reboots in TV are apparently all the rage these days, and include offerings like Fuller House and Gilmore Girls: A Year in the Life. Honestly, I'm not sure if anyone expected Will & Grace to be as entertaining and true to the original show as it turned out to be. But the show has undeniably done really well. Its first season was quickly expanded to 16 episodes from its original 10, and it has already been renewed for a second season. Critics and audiences alike are loving the return to good old Will & Grace, with the characters exactly the way we left them.

I suppose the question I'm left with now is how long will the show continue this time? We maybe can't expect another ten years of this, but just a few more is exactly what the doctor ordered.