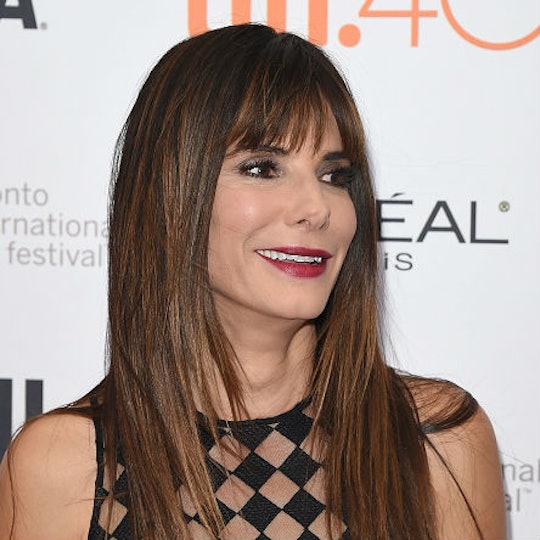 Why It Doesn't Matter What Sandra Bullock's Daughter Looks Like

On Tuesday, Sandra Bullock revealed that she adopted her second child, Laila, a 3-year-old girl from Louisiana. But who little Laila is seems to be a bit of mystery. Because while Bullock announced her adoption in the latest issue of People, Laila's face was turned away from the camera while Louis's face — her first child — was obscured by a mask. This left many asking "what does Laila look like?" But the real question is "why does it matter what Laila looks like," because — in truth — it doesn't. It is none of our damn business.

I'll admit it: I'm that mother; the one who keeps pics of her daughter off Facebook and Instagram. I don't email or text her image to those I don't trust, and I am very protective of giving away too much. So I am not surprised by Bullock's bold move. She wants to protect her children's safety and privacy, and she wants to preserve their identity. But according to Bullock there is yet another reason. As she explained to People:

Most foster children are in foster care because they were taken from their birth homes under tragic circumstances — and the last thing I wanted was to bring more harm to her because of the nature of my job.

Bullock has become something of an advocate for the rights of celebrity children. After revealing her own son, Louis "doesn't like" the paparazzi, she backed legislation to protect children from paparazzi, stating that "children should be allowed to be children and not be sold." And, IMO, she is right. We may be curious; we may want to "oooooo" and "ahhhh," but it doesn't matter what we want, because this is her family — and she needs to do what is best for her and them. And they deserve privacy. Their deserve safety, and they deserve happiness. Luckily for Bullock, Louis, and Laila, it seems they have just that:

When I look at Laila, there's no doubt in my mind that she was supposed to be here...I can tell you absolutely, the exact right children came to me at the exact right time.

Congratulations, Sandra — to you and you entire, expanded family!