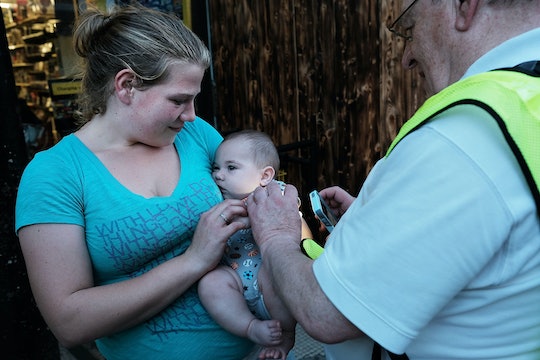 Nineteen-ninety-eight was the year Harry Potter And The Chamber of Secrets came out and the year Bill Clinton told the world that he “did not have sexual relations with that woman.” It was also the second year in a row that my family had all of our Christmas gifts donated by complete strangers because my single mom couldn’t afford to buy us any. My parents split up when I was 9 years old, and my two little sisters and I went to live with my mom. Things were rough during those first few years following the split. Our meals came from the local food bank and the gas for my mom’s beat-up Camry was purchased in coins.

But my mom worked constantly, sometimes holding down more than one full-time job at once to make ends meet. Eventually, she was able to bring us out of abject poverty and into something slightly resembling the middle class. Things were still tight, but we had a lot working in our favor: student debt was virtually nonexistent for people my mom’s age, we could rent a three-bedroom house for about what a one-bedroom apartment costs now, and inflation hadn’t yet blown the price of everything from food to fuel sky high.

Now, in 2018, the givens that helped my struggling family start to thrive are simply not a reality anymore.

It’s not as easy to just “pull yourself up by your bootstraps” as it may have been 20 years ago.

According to the U.S. Census Bureau, 40.6 million Americans are living below the poverty line, which is $25,100 in annual income for a family of four. For these families, a toxic mix of debt, inflated housing costs, stagnant wages, and an astronomical cost of living have formed an almost insurmountable financial burden. It’s not as easy to just “pull yourself up by your bootstraps” as it may have been 20 years ago.

To understand the scope of what many of those 40.6 million families are facing, you have to look at the facts of what it means to be poor in America right now. Kelly, a Chicago-based single mom of three who asked to be identified only by her first name, tells Romper that she brings home about $35,000 a year — a marked increase from previous years when she was making $25,000 or less. Of that $35,000, Kelly says at least three-quarters of her money goes directly to basic necessities like rent, food, and medication for her asthmatic daughter. Kelly qualifies for section eight, a form of rental assistance for low-income households that cuts her monthly rent from $1,450 to $1,130. She also spends $500 monthly on groceries and around $300 on utilities. Two of her children are in college, and annual tuition at their public universities costs $28,000 per kid. Kelly has personally taken out $24,000 in loans to help her oldest son pay for school, in addition to her own student loan debt, which is in deferment while she pours everything she has into helping her children succeed.

Financially, Kelly is stretched beyond her limits, and the sad fact is that her financial situation is not unique. Around 78 percent of Americans report living paycheck to paycheck, including many who are a part of the middle class. One in three families spends a full third of their income on childcare, while seven in ten families say childcare is entirely unaffordable, per Care.com. The average rent in the U.S. is over $1,000 per month, according to Census data, while the federal minimum wage sits at an astonishingly low $7.50 an hour. Even in places like California, where the minimum wage is $11.00 per hour, full-time minimum wage workers still make only about $22,800 annually and their rent is almost twice the national average. On top of all of that, there’s student loan debt, which for most people now exceeds the amount of their credit card debt, auto debt, and all other non-mortgage debt, combined, according to analysis by the Fed.

The price of nearly everything has gone up, yet the majority of Americans aren’t making much more money than they were 20 years ago.

The price of nearly everything has gone up, yet the majority of Americans aren’t making much more money than they were 20 years ago. And when they do manage to pull ahead, sometimes the cost seems like it outweighs the benefits. To make ends meet, Kelly tells Romper she worked overtime almost every single day last year, pulling 60-hour weeks at her job at a major insurance company. “I managed to bring in $48,000 last year,” she says. “It was constant work. And $40-50,000 doesn’t sound like a lot of money but... even though I was working overtime almost every day, it was the first time that I ever felt financially comfortable.”

But it was exactly that little bit of security that put Kelly in a more difficult financial situation this year. Her company cut overtime hours, effectively eliminating her ability to make extra money, but her higher income from last year means she no longer qualifies for many of the financial assistance programs she previously relied on to get by.

“Initially, we were eligible for free lunch [for my 10-year-old son]. I can’t get free lunch anymore because it’s based on last year’s income and I made too much money,” she says. “At the YMCA, you could get a scholarship if you were below a certain income. Well, I’m above that now. So, for a lot of things it’s like the harder you try, the more you’re penalized… for a long time I made, like, $25,000 and I could get assistance with food… All that stuff goes away when you really put your back into it and you’re trying to get out of the situation.”

she got, like, $400 in food stamps for her family. She called me so happy, and I remember feeling like crying because my refrigerator is empty and I’m working 60 hours a week.

Kelly says a former neighbor of hers, who is also a single mom, got a great new job making $14 per hour. The problem was, making that much money trapped her in a vicious cycle of falling short on payments for nearly everything. “She had a section eight voucher as well,” Kelly says, “so [because of her new income] her rent went from, I think, $50 a month to $800 a month. And then on that $14 an hour she also had to buy groceries because she didn’t get food stamps anymore. She had to pay childcare so that she could go to work.”

Eventually, things got bad enough that the neighbor quit her job to stay home, because the only way she could afford to live is if she made a low enough income to qualify for public assistance. “To me, she settled, you know, instead of just pushing through it,” Kelly says. “But I totally understand — it sounds ghetto for me to say — but I understand where she’s coming from. I remember, like, right after she quit, she called me, and she was so happy because… she got, like, $400 in food stamps for her family. She called me so happy, and I remember feeling like crying because my refrigerator is empty and I’m working 60 hours a week.”

In the growing gap between poverty and financial security are a million stories like Kelly’s and that of her neighbor. In the U.S. we talk a good game about pulling yourself up, putting your best foot forward, and living the American Dream, but it could be that the dream isn’t even possible for most people anymore. A 2016 paper by Michael D. Carr and Emily E. Wiemers, two economists at the University of Massachusetts in Boston, showed that for the majority of Americans, the ability of workers to climb the financial ladder — what we call “earnings mobility” — has been in decline since 1980, meaning that where parents could once reasonably assume their children would wind up better off than they were, the opposite is now true. “The probability of ending where you start has gone up, and the probability of moving up from where you start has gone down,” Carr explained to The Atlantic. “If you’re in the middle, you’re stuck in the middle, which means there’s less space for others to move into the middle.”

This is especially true now that the Trump Administration is hard at work trying to eliminate the access of millions of people to social safety nets. The 2019 Federal Budget includes plans to cut funding for the Supplemental Nutrition Assistance Program (SNAP) by $213 billion — or about 30 percent — over the next 10 years, mostly by changing program requirements and rendering about four million current users ineligible. The budget also includes a plan put forth by Housing and Urban Development Secretary Ben Carson to raise rent for people who rely on public housing assistance. Under that plan, the amount that tenants who receive housing assistance pay towards rent will jump from 30 percent of their income to 35 percent, a move NPR reports will cause rent to triple for some of the program’s neediest families.

As if those two huge blows weren’t bad enough, the budget also cuts Temporary Assistance for Needy Families (TANF), which provides funding for numerous state-level programs that provide temporary income assistance to needy families, and eliminates the Social Services Block Grant, which offers funding to states for child care assistance, programs for the elderly and those with disabilities, and programs for the homeless. Finally, the 2019 budget includes healthcare cuts that will eliminate the Medicaid expansion that has provided healthcare to 12 million low-income adults, leaving millions uninsured.

In the U.S., we tend to treat poverty as a personal failing. We stereotype impoverished parents as lazy, uneducated, and eager to live off of the government rather than working hard for their kids. But a 2015 study by the University of California showed that 73 percent of people enrolled in public assistance programs were members of working families. They are working to better their situations, but the system is designed to work against them. For the vast majority of these impoverished families, living in poverty is not just harder than it was two decades ago, it’s nearly impossible to overcome.