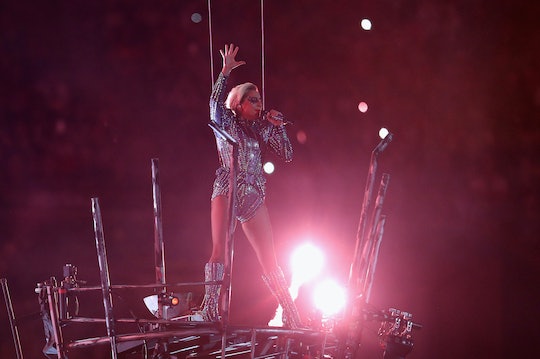 Tonight, the greatest display of talent, coordination, and skill was presented to us free of charge on our televisions. Sure, you may have had to watch some men in helmets run around a green field for a while to get there, but eventually, we were all blessed with Lady Gaga's halftime performance at this year's Super Bowl. And while there were about a thousand moments from her set that were powerful in their own way, there was something about her choice to sing "Born This Way," for a longer amount of time than some of her other songs that mattered. And in the midst of our new administration, it's truly important that Lady Gaga sang "Born This Way" at Super Bowl 51.

The song, which came out on Lady Gaga’s 2011 album of the same name, has since been an anthem of sorts for the LGBT community. Its empowering lyrics, strong imagery, and its accompanying music video have propelled it into “timeless” territory since its inception.

Of course, there’s something even more moving in Gaga's latest performance. While she didn't direct her performance to anyone, necessarily, with an opening comprised entirely of patriotic tunes such as "This Land is Your Land," it's hard not to see the song as somewhat of a political statement, especially with Trump's recent actions regarding the LGBT community and minorities in general.

When "Born This Way" premiered in 2011, the world looked a little different. Sure, we still had Barack Obama as our president, but the LGBT community as a whole was continuously being attacked, and fighting for equal rights.

Fortunately, with the 2015 Supreme Court ruling, same-sex marriage has been legalized in all 50 states, but with a Trump presidency, those rights are feeling threatened all over again.

The fight for equal rights is still waging on, unfortunately, for anyone who looks, thinks, acts, worships, or loves differently than our current president. Which is why now, during one of the world's most-watched programs, Lady Gaga's performance of "Born This Way" means so much to so many.

Notably, with Vice President Mike Pence in office alongside President Trump, the song makes an even greater impact. Pence, who has notoriously praised the good works of conversion therapy, has come under fire for approving of anti-LGBT legislation in the past. And with Pence being present at the stadium in Houston, Gaga's message, though subtle, could not be more clear.

Thank you, Lady Gaga. You used your stage, and your platform, to make a statement. We heard you, and we thank you. Now, we can only hope, fight, and pray, that others will open their hearts as well.