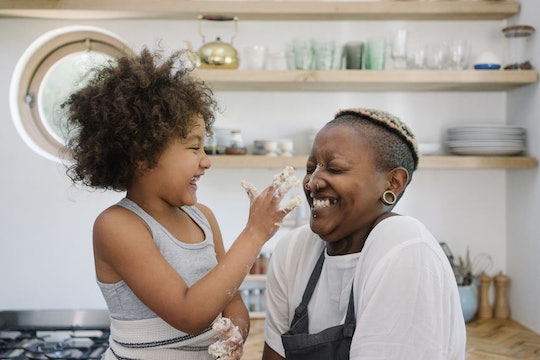 Why It's *So* Important To Laugh At Your Kids' Jokes, According To Experts

The high-pitched peal of a baby's giggle is one of the best sounds in the world, but you might be surprised to learn they love the sound of your laugh just as much. Recent research shows that children actually benefit from making others laugh, which is why it's so important to be a good audience for your little comedian in the making, especially with April Fools' Day around the corner. Who knew jokes could have such serious consequences?

Dr. Emma Byrne, who holds a PhD in Artificial Intelligence and is the author of Swearing is Good for You: The Amazing Science of Bad Language, tells Romper that children start trying to make others laugh within their first year of life. "Kids as young as 8 months old know that getting our expectations up and then changing what they do, disrupting those expectations, can actually make us laugh," she says. She went on to give examples of babies trying to make their caregivers laugh, such as "holding things out and pulling them away, blowing raspberries" or even fake coughing to get someone to look at them. (I taught my nephew to do that last one when he was a baby, and his parents still haven't forgiven me two years later.)

The biggest takeaway from the talk from Byrne was the selfless nature of children's jokes. "The fact that they are trying to get you to smile is a big deal. You know, they're expending energy... to try to make you smile," explains Byrne, highlighting that children tell jokes from an empathetic point of view rather than a ploy for attention. Their very attempt at humor indicates they want to do something to make you happy and connect to those around them on a deeper level, which is an important step to take as they develop. In fact, recent studies on children's behavior indicates they're altruistic from a young age, and their earliest attempts at humor are just further proof of their unselfish natures, as their intention is to make you, the person who loves and cares for them, happy.

Plus, humor teaches your children how to be better people overall. A 2016 study found that funnier people have higher nonverbal and verbal intelligence, and Psychology Today reported that positive humor can make interpersonal relationships more successful. Byrne concurred, saying funny kids "end up being able to modulate how they show their emotions or modulate how they give information, making them better communicators" and that "kids who are more willing to try joking" will be more successful at forming relationships, as "being able to be funny about things... allows you to avoid conflict." Humor takes some of the seriousness out of interpersonal interactions, which will make your child a more attractive playmate as they navigate friendships. Byrne also points out that the humor young kids use "has the same skills of creativity and creative problem solving that we require a lot as we grow up," so being a jokester literally helps children develop skills they need to be fully formed adults. It's hard to find a downside to supporting your child's lighter side.

As far as the specifics on how to encourage your kids sense of humor goes, Byrne recommends modeling humor for them by using word play, knock knock jokes, or whatever other kind of comedy you like best. You'll probably encourage humor on your own through the way you communicate with them, but being intentional in the kind of jokes you tell will only make your kid's sense of humor more developed.

The important thing is to encourage their comedy at every turn, because it allows them to connect with the world around them. You can help them become a kinder, more well-rounded person simply by responding positively to their attempts at humor, so try to laugh at your little ones even if their jokes aren't the funniest you've ever heard, because the key isn't that your child is the next John Mulaney; it's that they're willing to play with words and situations and not take life too seriously. "Showing that you appreciate their effort, that you recognize that they... are trying so hard to make you happy, to make you smile" will help them further build that sense of empathy explains Byrne. You might be surprised how much that giggle impacts them.

More Like This
30 Messages To Write In A Valentine's Day Card For Your Child
These 72 Instagram Captions Are Perfect For Your Snow Day Pics
A Parent’s Guide To Stomach Pain In Kids
13 Is "Too Early" For Kids To Be On Social Media, Surgeon General Cautions
What Parents Are Talking About — Delivered Straight To Your Inbox