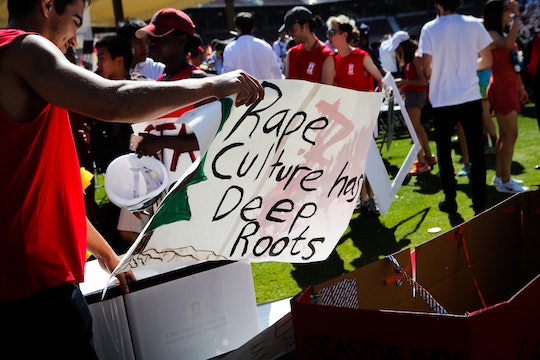 Why It's Important To Shut Down Rape Culture, & How To Do It

The lenient sentencing of Brock Tuner in early June for raping a woman behind a dumpster took everyone with a conscience by surprise. Not just because he raped a woman and seemed to get off easy (though that was very much a thing) but mainly because his defense in court, against his victim, harped on the fact that they were both drinking at the time of the assault. That his defense worked is why it's important to shut down rape culture.

The problem with Brock Turner's six month sentence wasn't just that it was lenient, though it was. It was that he claimed some sort of privilege to get that sentence and repeatedly — with his own impact statement and with those of his family and friends — put the burden of proof on booze. He said that college life, party culture, raped the Stanford victim. Not Brock Turner. In that context, he is somehow victim, too.

I call bullshit on the "party culture" defense. If anything, the Stanford rape victim and Turner have only one single, disgusting thing in common: rape culture has now defined them, in very different ways. And the only way to stop the Brock Turners in this world is to call out rape culture when you see it.

Rape Culture is a term that gets, unfortunately, thrown around a lot and no one seems to know what it really means. You might have to guide your sisters and brothers to get that rape culture is a very simple thing. According to Women Against Violence Against Women, it is:

The ways in which society blamed victims of sexual assault and normalized male sexual violence.

It's every time someone says "boys will be boys" or looks at a 12-year-old girl in a tank top and sends her home from school. Rape culture isn't just about rape — it's how we somehow let men's sexual desires override a woman's safety walking home, even drunk, even in a tank top. It's when we start to say, "Well, she's asking for it."

So it's important to call it out when you see it. We tend to assume that the rapist has some good in them. That's a nice instinct, to see the good in people, but it's often biased. Brock Turner was repeatedly, as a white college aged man, given the benefit of the doubt. Many other rapists or even men accused of rape don't get that kind of leg up in court. When someone forces themselves on someone else, without their consent, it's rape. There are no "levels" of rape, as some of Turner's friends suggested — not even if they "were both drunk." It's all rape.

For some reason, rape culture is hard to talk about, even in the days of Beyoncé telling us all to get in formation. Because as much as being a badass is powerful and everyone likes the idea of feminism, we have a long, long way to go.

Women tend to lose power the minute they order a beer at a bar or wear a spaghetti strap dress. God forbid they do both of those things at once. Fighting rape culture means allowing for the fact that women shouldn't have to feel shame about drinking as much the dudes that they're out with or wearing clothes they feel comfortable in. It means, and this is the saddest part, asking a man to walk us home or get into an Uber without feeling afraid about giving off the "wrong message."

Brock Turner's sentence showed everyone how dangerous rape culture can be. It's time to stand up and fight it.