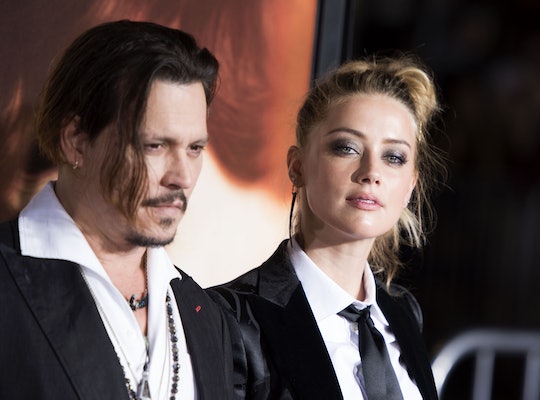 Asked to describe Johnny Depp, fans could give a lot of different answers. He's the swoon-worthy '90s icon who adorned the walls and lockers of crushing high schoolers. He's swashbuckling Jack Sparrow or deceptively gentle Edward Scissorhands. He's Tim Burton's technicolor interpretation of childhood icons: a wacky Willy Wonka or a sensitive, wounded Mad Hatter. But no matter one's mental image of Depp, accusations of domestic violence may seem startlingly out of character. When Amber Heard made public allegations of abuse against her husband of 15 months, Depp fans bristled at the dissonance between the actor they'd come to love and the actions Heard described. Accepting the possibility that Heard's story is true is understandably distressing, but Johnny Depp's "good guy" rep doesn't invalidate Heard's accusations.

Depp's representatives have not responded to Romper's request for comment. Heard and Depp moved in together in 2012 and married in February of last year, NBC News reported. The couple reportedly separated toward the end of May, and Heard filed for divorce shortly before requesting an order of protection. Her "sworn declaration" included the following statement:

During the entirety of our relationship, Johnny Depp has been verbally and physically abusive to me. He has a short fuse. He is often paranoid and his temper is exceptionally scary for me.

The order of protection keeps Depp from associating with Heard before their June hearing, though he will still have access to their dogs and will not be required to attend the anger management classes Heard requested. On May 25, People published images of Heard appearing to show "facial injuries" reportedly inflicted by Depp in December. The most recent incident of potential domestic violence occurred on May 21, according to E! News; a court document indicated that Depp allegedly hit heard with a cellphone during a confrontation in their penthouse.

Though police responded to a call at the scene, NBC News reported that there were "no visible injuries" or requests to press charges. Heard claimed she delayed filing a report of domestic violence at the time in order to keep the matter private and avoid causing professional repercussions for Depp, according to USA Today. Others believed that the allegations of abuse only emerged in order to give Heard the upper hand after Depp denied her request for spousal support. Comedian Doug Stanhope wrote a column for The Wrap defending his friend Depp, CNN reported; he said Depp told him before the incident on May 21 that Heard revealed plans to lie if need be in order to have control over the terms of divorce. Heard's lawyers, Samantha F. Spector and Joseph P. Koenig, shared a statement with E! News:

Amber has suffered through years of physical and psychological abuse at the hands of Johnny. Amber is simply a victim of domestic violence, and none of her actions are motivated by money. Amber is a brave and financially independent woman who is showing the courage of her convictions by doing the right thing against Johnny's relentless army of lawyers and surrogates.

Though details of the circumstances surrounding the allegations may emerge slowly, backlash against Heard appeared quickly following her court filing. Fans took to Twitter and other online outlets to question how an actor who seemed so kind could possibly hurt a woman. Depp's daughter, Lily-Rose, defended her father on Instagram:

My dad is the sweetest most loving person I know, he's been nothing but a wonderful father to my little brother and I, and everyone who knows him would say the same.

Anyone defending Depp premises their remarks on who they know the man to be, but it's equally important to recognize that an actor famous for transforming himself could also be someone entirely different behind closed doors. Heard's remarks may not be true, but they deserve serious consideration in a court of law — and not via public discussion.

According to the National Coalition Against Domestic Violence (NCADV), abuse is a widespread problem:

On average, nearly 20 people per minute are physically abused by an intimate partner in the United States. During one year, this equates to more than 10 million women and men.

There are systems in place to ensure that survivors get the support they need, but many don't have the opportunity to take advantage of the help. The NCADV reported that of those injured by that abuse, just 34 percent "receive medical care." A report in the Journal of Epidemiology & Community Health indicated that survivors of domestic violence are often afraid to report what happened to them. They may be concerned about protecting themselves and their children or worry about compromising their financial independence. But often, survivors fear some form of societal backlash. An abused individual already feels vulnerable; the possibility of public shaming can magnify that feeling.

Heard and Depp may have a long legal battle ahead of them, but it's important for the public to work toward neutrality of opinion. Whether Heard's allegations are ultimately validated in court, it's important for society to respect her right to make them. Natalie Finn argued the point eloquently in an E! News editorial on Depp:

No one wants to believe that Johnny Depp abused his wife, that such a capacity for violence was hiding in plain sight during all those years of drooling and admiring and ticket-buying. But we also don't want a climate in which Amber Heard is shamed for coming forward just because of who her husband is. That's the opposite of progress and fairness, and it feeds into an archaic way of thinking.

By offering Heard dignity during the court proceedings, the public can demonstrate to domestic violence victims that they won't be demonized for seeking justice. No one should have to fear getting the help they need during a personal crisis, but individuals are only protected if the "innocent until proven guilty" mentality holds for both the accused and the accuser.