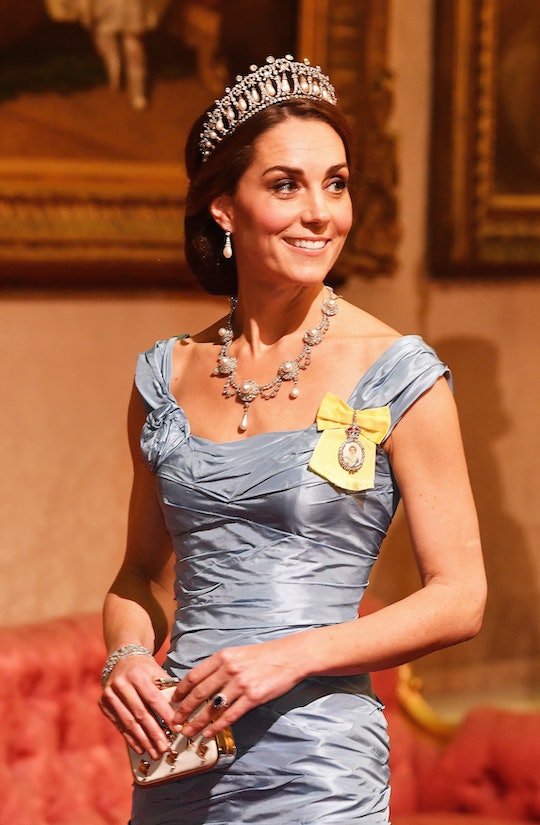 Kate Middleton's Tiara Has A Special Connection To Princess Diana

She's a duchess and married to the likely future King of England, so being photographed wearing a beautiful coronet is nothing either new or shocking. But Kate Middleton's latest headpiece — a stunning tiara — honors Princess Diana in gorgeous new photos.

As Harper's Bazaar reported, this week's state dinner at Buckingham Palace honoring the visiting King and Queen of the Netherlands was perhaps most notable not for Kate's fabulous ice-blue Alexander McQueen dress, but the accessories she paired with it.

Her most noticeable sparkler was the incredible "Lover's Knot" tiara, a diamond-and-pearl bedecked crown once favored by Princess Diana that the late royal wore on many notable occasions, according to another Harper's Bazaar article, including official visits to Italy and Hong Kong.

The headpiece reappeared in public in 2015, the magazine added. And while it was clearly a favorite of William's mom, the "Lover's Knot" crown was not actually Princess Diana's, according to Town & Country magazine. It technically belonged to Queen Elizabeth II, who received it from her grandmother, Queen Mary. Queen Mary had the tiara custom-made in 1914 and it was inspired by a piece owned by Mary's own grandmother, Princess Augusta of Hesse.

The magazine added that the piece Kate wears and Diana formerly wore made by famed London jewelers House of Garrand. The original crown was called the "Cambridge Lover's Knot."

Sadly, when Diana divorced Charles, she was not allowed to keep Lover's Knot permanently — she wore it for the last time publicly in 1991, according to Harper's Bazaar. Town & Country reported that the piece is so heavy, Diana said it hurt to wear it, but loved it anyway.

T&C noted that Kate has sported the dazzling piece at least four times since joining the royal family (although Harper's Bazaar reported that Kate has worn the piece three times times; people really track these things).

In spite of its bittersweet history as a regular wardrobe item for Kate's late mother-in-law, who tragically passed when William and Harry were 15 and 12, according to PopSugar, it's wonderful to see such historic jewelry in use again.

At the same dinner, for example, the Duchess of Cambridge also wore a stunning diamond and pearl necklace first owned by Queen Alexandra in the 19th century, a favorite piece of the late Queen Mother's, according to Harper's Bazaar (it seemed to match Diana's old tiara perfectly; amazing that they were not actually made to go together).

Kate also wore a yellow ribbon and pin set, called the Royal Family Order of Queen Elizabeth II, that's quite significant. This means the Queen has chosen to honor a certain member of the royal family for her service. Kate is only the second granddaughter-in-law in history to receive this honor from a living monarch, reported the blog Royal Musings.

People magazine added that William and Kate are becoming regulars at state dinners at the palace, although they were not invited prior to 2015.

The dinners are formal occasions, the magazine noted, calling for ultra-dressed-up gowns and full-scale jewelry such as tiaras, with the dinner portion of the evening taking a full artillery of royal chefs six month to plan, and including six glasses per place setting. Phew. As the royal family grows and William's generation of royals matures, there are sure to be more invites to glittering occasions to come.