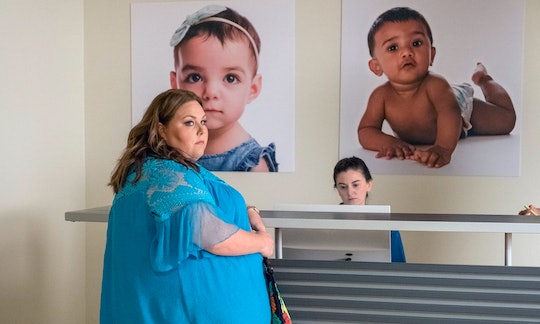 What 'This Is Us' Gets Right About Moms Struggling With PCOS

Tuesday night's premiere of This Is Us addressed a plethora of difficult topics that without simple solutions. This is largely why so many viewers, like myself, watch the show. Adoption, alcoholism, identity chasms, anxiety disorders, and the loss of an irreplaceable being are all things so many can relate to. More than that, this episode in particular captured the devastation that comes from PCOS-related issues. Kate's infertility on This Is Us is something more women should talk about because the lack of accurate representation and honest discussions are harming the narrative of those suffering.

According to the U.S. Department of Health, one in 10 women of childbearing age experience Polycystic Ovary Syndrome (PCOS) and the Centers for Disease Control and Prevention (CDC) states 10 percent of women ages 15-44 have trouble getting or staying pregnant after one year of trying, and are labeled "infertile." While This Is Us is one of the only shows on TV that speaks to me on multiple levels — most notably Randall's loss of his estranged biological father, William, in Season 1 — Kate's story (played by Chrissy Metz) resonates for different reasons. I suffer from PCOS and, years ago, I was diagnosed with secondary infertility while trying to become pregnant with my second child. I didn't tell anyone and I wish now I had.

In case you aren't familiar with the disorder, PCOS is caused by an imbalance of reproductive hormones which causes further problems with how the ovary releases the egg — if it's released at all. Cysts form on the ovaries, some incredibly painful, and PCOS is the most common reason for infertility. All that aside, other symptoms include irregular periods, abnormal hair growth, and acne. I've been through all of this. I've had cysts grow into painful rocks. I've had surgeries to remove them even though they'll return. I've even had an ovary removed. And, like Kate, I've become pregnant only to miscarry. The losses were linked to my PCOS, and at that time, no one I knew understood what I was going through. It felt as though the world and all its crushing weight fell on top of me. There was no escape from the grief, and no one to shoulder my burdens of guilt and shame. Simply put, I felt alone.

For years my husband and I pushed through, even when the pregnancy test came back negative each and every month. My body betrayed me at every whim, and though I still had a beautiful daughter to remind me I wasn't failing at everything, I couldn't help but slink back into those lingering feelings of inadequacy. Like Kate, I had to contend with my weight but my doctor, unlike the doctor on the show, never blamed on me or my body for its role in infertility. He explained how little is actually known about PCOS, that it affects women of varied weights, and, as The New York Times echoed, that cysts alone aren't a diagnosis of PCOS (because it manifests in a lot of different ways). Actually, that same articles also stated only half of American women diagnosed with PCOS at the time were obese.

The weight bias and toxic fatphobic discrimination is a narrative I'd love to see less of — especially on TIU — but I also hope the show delves deeper into dismantling the stereotypes around PCOS, weight, and infertility and that they do so with extreme care to reiterate the PCOS is not Kate's fault, so that viewers are reminded it's not theirs for similar pains, either.

Christine Greves, MD, an ob-gyn with Orlando Health System in Florida told Health that although excess weight can alter hormone function and interfere with IVF success rates (which can lead to PCOS), but it also "doesn’t mean a high-risk patient like Kate shouldn’t receive treatment." Similarly, a 2017 article published in Human Reproduction Open said denying women fertility treatment because they are obese isn’t fair if the same treatment would be carried out in women with other risk factors.

In Season 2, I watched Kate's pregnancy with cautious enthusiasm. I cheered for Toby when he was, in the truest form, a partner to Kate while she grieved her miscarriage. And I hurt for them each and every time Kate faced questions about her fertility or loss because even though I finally did have my second child, those memories never go away; it still stings to think of what happened before, during, and after those heavy doctor's appointments. The ones filled with apprehension and uncertainty; the ones where I left feeling defeated and uninspired.

According to Variety, 10.3 million viewers tuned in Tuesday to witness Kate and Toby's frustration as they sought IVF treatment. When I sat in my doctor's office to discuss the same thing, I had no viewers — no fans to cheer in support of me — no script to follow. Having PCOS-related infertility is a lonely journey. You don't know if, or when, it'll get better; if you'll ever have the baby you dream of. You don't know the person you'll become because of going through it. As for Kate, no matter how her journey ends, I'm happy to see someone on TV experience some of the things I carried in silence. Even though I've learned how to speak out about my infertility since, Kate's storyline might inspire others previously silenced to speak their truths, too.