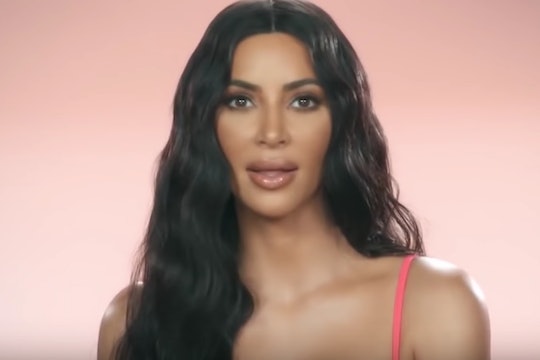 Kim Kardashian and Kanye West's newest addition finally has a name that everyone is freaking out over, of course. On Friday, the mom of four announced on social media that their new son has a very special name, Psalm. While there has been a lot of speculation about the name, sources are now revealing why Kim Kardashian named their new baby Psalm, and the meaning behind his name is actually quite special.

This past week has been a wild one. Late last week, Kardashian took to social media to share a series of text messages from West, who helped introduce their baby's name (and share the first photo of him, ever). "Beautiful Mother's Day," West wrote in the screenshot. "With the arrival of our fourth child/We are blessed beyond measure/We have everything we need." Kardashian added in the caption of the photo that their son's name is Psalm. (Editor's Note: The post has since been deleted.)

After hearing the name, many people understood that it is likely deeply rooted in religion. But there is just a little more meaning beyond this. A source told E! News earlier this week that Psalm was chosen by West to represent their family's spirituality and devotion to faith.

"It was very important to him, and Kim wanted the name to have a significance that held a true representation of their family, so she agreed on the name," the source told E! News.

West's faith clearly means a lot to him. This year, West started holding "Sunday Service," a religious experience involving a church choir, praise, and a lot of worship music, according to Variety. Kardashian tried explaining what goes on at Sunday Service during an appearance on Jimmy Kimmel Live! in April, according to Billboard. "It's just more of a healing experience," she said. "There's actually no praying, there's no sermon, there's no word, it's just music and it's just a feeling."

Khloé Kardashian, Kim's younger sister, explained that it's a place where everyone can feel welcome and feel like themselves, according to Billboard. "We have so many friends who feel a little judgmental when they go to church or something like that," Khloé previously said. "When they come here, they feel so free and...safe is what everybody says, and you have a great time. It's a beautiful way to start your week."

Given how much these services mean to West, his family members, and others, it makes sense why he would want to give his son a religious name.

Since the beginning of his music career, West has been open about being a spiritual person. Since his debut album in 2004, West has rapped about his faith and belief in God, according to XXL, and even posed as Jesus for the cover of Rolling Stone in 2006.

Indeed, the name Psalm appears to represent so much to the Kardashian-West family and their strong faith.