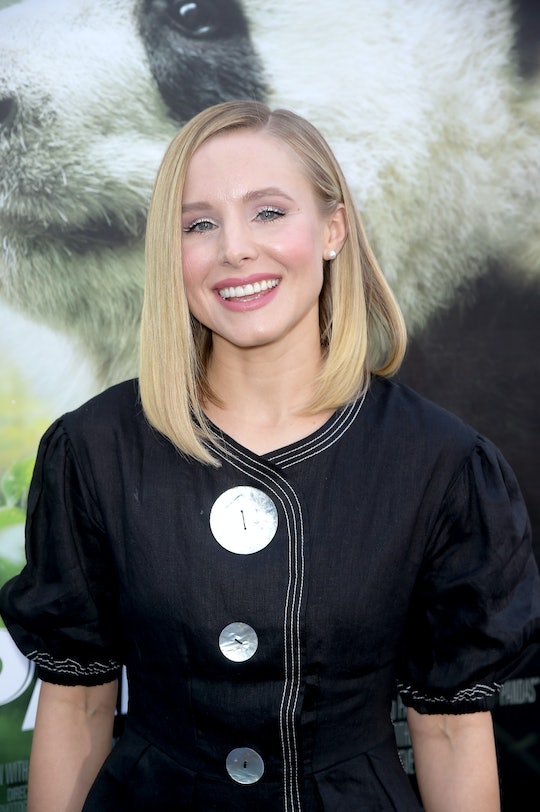 With each child I have, I swear time speeds up exponentially. It's like, one minute I'm rocking this tiny newborn and just trying to soak in every detail — from their sweet-smelling head, to their ultra-kissable cheeks, to the way their body instinctively curls up in a ball like they're still in the womb — and the next, they're these little people with personalities and feelings. As a parent, it's so easy to feel nostalgic about the snuggly newborn phase — and maybe even feel sad that those days are behind me. But why Kristen Bell is "looking forward" to her kids getting older has given me a whole new perspective. And it just might make you view your kids getting older a bit differently, too.

On Saturday, Bell was at the Pandas premiere in Hollywood — she's actually narrating the IMAX film that's set to hit theaters on April 6 — when Us Weekly caught up with the funny actress. The mom of two daughters — Lincoln, 4, and Delta, 3 — talked about how she's learning to embrace her kiddos leaving toddlerhood behind.

“It is [bittersweet],” the actress told Us Weekly. “I was really hoping when I had kids, I got the two that wouldn’t grow up. But I didn’t."

You can either look at it like you’re losing something, like she’s never going to be a baby again, or you can change your glasses and look at it positively. Like I now get to know this human being. I’m allowed to get to know this person who will have her own opinions and ideas. That’s something I’m really looking forward to.

Holy crap. These are some serious words of wisdom from the 37-year-old Bad Moms actress.

Bell is definitely a contender for my all-time favorite celeb mom. She's just so insightful while at the same time being brutally honest. Plus, she doesn't shy away from tackling TMI subjects — like when she caught "anal worms" from her daughter, Entertainment Tonight reported. "You have to monitor and you have to look in their poop," Bell said in an appearance on the Joel McHal Show on Netflix. "And when you wipe their butt, sure enough — I wiped and saw a little, white worm. I know, she’s really gross. My daughter, not the worm. The worm was gross, too." LOL. (Thanks for the visual, Kristen.)

Or that time that her husband, Dax Shepard, helped her out by literally nursing from her breast when she was suffering from mastitis, Cosmopolitan reported. "I said to my husband, ‘I really need you to suck this out. We could talk about it, we could be weird about it, or you could just go ahead and nurse," Bell said. She continued:

He pulled it out. He had a cup next to him. He was pulling out and spitting into this cup, and I’ve never been more in love in my life.

It's worth noting that Bell and Shepard have fiercely protected their daughters' privacy over the years by not posting photos of them on social media, as HuffPost reported. (The image below is the closest glimpse that fans have gotten either Bell-Shepard child.) Even so, it obviously hasn't stopped Bell from sharing her hilarious motherhood experiences online and in interviews. And for that, I'm extremely grateful.

Honestly, I love Bell's perspective on coping with her kids getting older. Because it's so easy to focus on the, "Where did my babies go?!" aspect of my own children getting older, I don't often think about all of the amazing memories we will be making in five years or so. Currently, my three kids are 6, 4, and almost 2 — so going anywhere with them is pretty much a struggle at this point. Fast forward a few years, though, and all of them will be able to wipe their own bums, take showers by themselves, tie their own shoes, etc. And we'll finally be able to do cool things together — like go on family bike rides, go to theme parks and ride roller coasters together, and maybe, just maybe, go to the grocery store without a meltdown.

Of course, we're considering having a fourth child, so these aspirations could very well be moved back a few more years. But still. I'm excited to discover more about who my children are as their little personalities continue to blossom. And it definitely helps me miss the baby years a lot less.