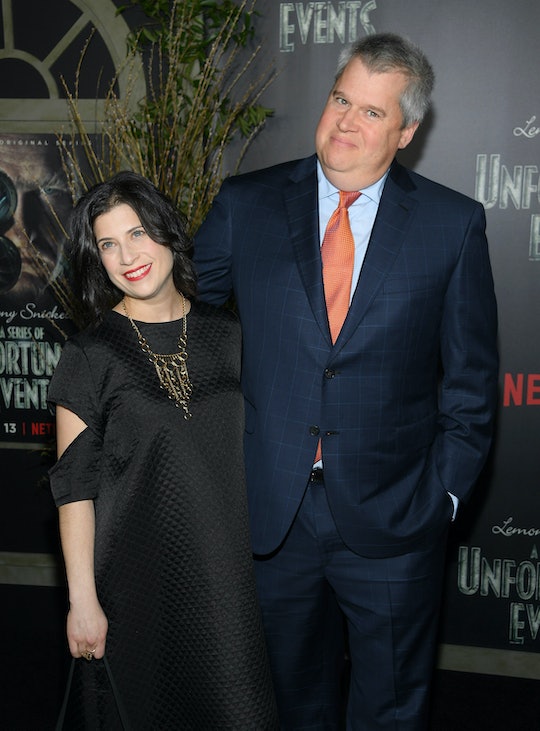 I've always been drawn to books and poetry that delve into "taboo" topics. Even as a child, the stories that didn't always have a happy ending were the ones that caught my attention. So, it doesn't come as a surprise when I say that I was intrigued by the works of bestselling author Lemony Snicket, a.k.a. Daniel Handler. Together with his award-winning illustrator wife Lisa Brown, the two have been immersing readers in an imaginative world for years. And, during this time, Handler and Brown have never shied away from dark topics.

The couple has worked together for years, and their collaborations curate story lines and illustrations that are enjoyed by readers of all ages. But more important than pleasing their fan following is pleasing each other.

"Most of our creative process involves lying around cracking each other up," Handler says in an interview with Romper. "So I would say in any given week, we spend two or three nights, say on the sofa, laughing at something only the two of us would find funny."

At times, ideas for the title of a book or Brown's illustrations happen before a story line does. Inspiration strikes the couple at any given moment, like before drifting off to sleep or during a night out to dinner, which was the case for Goldfish Ghost.

"The title Goldfish Ghost for our last book, it was me saying 'goldfish ghost,' and Daniel saying 'OK, I'll go,' and he'll write it," Brown says. Handler adds that Brown, "drew a couple of fish floating around upside down, which immediately seems clear to me in terms of a story."

Why dead goldfish? Well, the idea came from the couple's son Otto's untimely experiences with pet goldfish and the time the family has spent in Cape Cod, Mass.

"The only pet we allowed him to have for a very long time was a series of, really like, immediately expiring goldfish," Brown says. "It never bothered him 'cause the ceremony of burying them in the yard was just as exciting as having a pet."

It's usually at least a possibility that something terrible will happen even in the most supposedly harmless of stories.

This isn't the first time the duo has tackled a difficult, somewhat dark topic. Handler and Brown often address themes such as death and loneliness in their work, as evident through Handler's A Series of Unfortunate Events, which has been adapted into a movie and a Netflix original series.

In Goldfish Ghost specifically, Handler says that the theme of loneliness is something that may be more daring than death and explains that even though the book begins with death, it's not focused on it.

Handler and Brown emphasize that they want their books, including Goldfish Ghost, to appeal and engage both adults and children.

In her illustrations, Brown puts "Easter eggs" where she hides different call outs to adults that kids wouldn't necessarily understand so that families can read the same book on two different levels. Handler agrees and says, "I think you want a book to be for everybody."

You can pick up a copy of their newest book for your family and meet Handler and Brown on their book tour promoting the release of Goldfish Ghost starting on May 2.