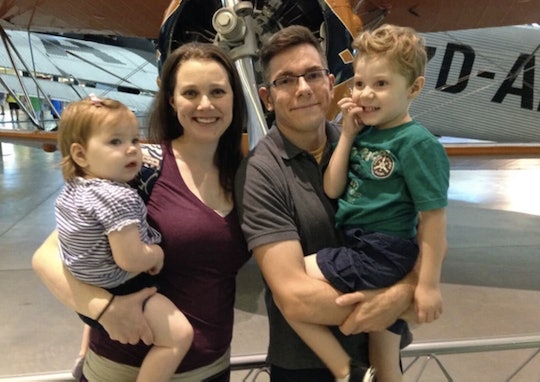 Why Losing My Baby Weight Isn't An Accomplishment

When my daughter was about 6 months old, not only had I lost the 35 pounds I gained during my pregnancy, but I'd lost 25 more too. I was the lightest I'd been since middle school, when I hadn't yet gone through puberty. People noticed. People commented. Apparently, I looked "fabulous." The thing is, I wasn't trying to lose the baby weight. I was actually terrified about the weight loss. I was worried I wouldn't continue to make enough milk to feed my daughter and that I would start to become frail.

I knew why I was losing so much. After three months of going to doctors, I finally had a diagnosis of microscopic colitis. In the spirit of full disclosure, I'll let you know that this condition causes your colon to basically stop functioning. Food went right through me. I had to go to the bathroom up to 15 times a day, and I was perpetually dehydrated from all the fluid loss. It also messed with my appetite, because eating large meals only caused the symptoms to worsen.

Microscopic colitis is like the less severe sister to Crohn's disease and ulcerative colitis. It's uncomfortable. It's very inconvenient. It made leaving the house difficult, since sometimes I had to go to the bathroom very urgently. One of the worst things about developing this condition when my daughter was 2 months old was that at a moment's notice I'd have to place her on the bed — or on the floor — and run to the bathroom. Or I'd hold her while I went. Eventually I bought bouncy seats for the sole purpose of bringing her to the bathroom with me. It was pretty miserable.

I have always practiced attachment parenting, and putting her down so much when she was teeny tiny made me feel guilty. My son, who's older, was always in my arms at that age. He napped on me. He was always next to my heart. My daughter, however, didn't really have that option. She was an easy, happy baby, and didn't seem to mind, but I still felt awful for not being able to parent the way I had with her big brother. I realize trying to parent equally and fairly isn't always achievable, but that didn't stop me from feeling like she was getting the short end of the stick.

On some level, I had loved the compliments, even though, intellectually, I knew they were misplaced.

Even though I was miserable, sick, and had fit the medical description of "wasting" due to the percentage of weight loss I had experienced, people still told me how great I looked. I was praised by almost everyone for my newfound looks. My cheekbones were prominent. My eyes looked bigger. My stomach was flat (both because of losing body fat but also because nothing stayed in there long). My legs were rail thin. My arms were stick-like. At 5'9", I looked extremely tall and willowy. Somehow I was still making plenty of milk — thankfully — but that meant the only place I hadn't lost a ton of weight was my breasts.

I looked more like a model than I ever have before, and people thought I did it intentionally. I heard, "You look great," and, "You don't even look like you've had a baby!" Deep down, I knew I didn't look great. I stopped taking pictures of myself. In many ways, I stopped wanting to be seen. People even asked:

How did you get your stomach so flat?

Eventually I just started telling people how I had achieved that look: I was sick. Even though I don't like making people uncomfortable, I told the truth.

Now, I have strong opinions about not commenting on women's bodies. I just don't do it. Even if they look great. Even if they're pregnant and they have the cutest bump I've ever seen. Even if it's a celebrity. I don't want to ever send the message that someone's worth is attached to how they look. Both for that person and for my children, who soak in every word. There are other ways to compliment a woman

The reason I don't comment is because of my experience with drastic weight loss. The compliments really skewed my body image. I struggle about as much as most women I know. I'm never 100 percent happy with what I see in the mirror. My eyes fly to the flaws. I feel guilty when I indulge in some foods. I've gone to bed hungry at times and felt proud of it. But having kids has actually really helped me accept my body in all the miraculous things it can do for me. I look at myself at one week postpartum with the remnants of my pregnant belly and my swollen breasts and still-puffy face, and I think it's amazing. I am in awe with how my body grew to provide for my daughter. I love that my belly was still there as evidence that that was her home for 10 months.

But once I heard time and time again that I looked wonderful even though I had crossed into underweight for my height, I started to think that that was the size I should try to achieve. Once I'd healed and my colitis was in remission, the weight started to come back, and I hated it.

I suddenly felt "fat" at a weight I had been so much of my life. It took a lot of soul searching (and quite a bit of shopping for clothes that fit for the millionth time that year) to feel confident in my normal weight. And really, all those compliments I received contributed. I never thought I was "fat" before. Not until everyone told me how much better and admirable I looked at my skinniest. Even though I knew I had been skinny because of an illness and took each compliment with a grain of salt, it didn't stop me from believing that I looked great. On some level, I had loved the compliments, even though, intellectually, I knew they were misplaced. It was a warped relationship, I know, but it's how I felt.

Now that I've had some distance — it's been two years since I started healing — I realize I love this normal weight. Because I'm only ever this "heavy" and "curvy" when I'm healthy. I've lost weight before as a side effect of anxiety and OCD surrounding food. When I treat the anxiety, I gain weight. When I'm depressed, I stop eating. When I'm feeling good, I eat. When I'm able to properly digest food, I hold onto a little more weight. A healthy amount of weight. My weight fluctuates, but I feel my best when I feel like me.

It's really difficult to be a woman and to try to always be body positive. It just is. It's easy to look in the mirror and hate a lot of what you see. I'm trying really hard to be happy with my healthier, stronger, softer body.

When I see an old friend with a baby in tow, I try to find something else to talk about. I know that some people like to hear compliments about their bodies (and that's absolutely OK), but for me, I'm reminded of how uncomfortable it was when my weight was the topic of conversation. Now I try and talk about something else, because you just don't know what someone's going through — or what they've gone through. And because there's always a million other things to talk about.