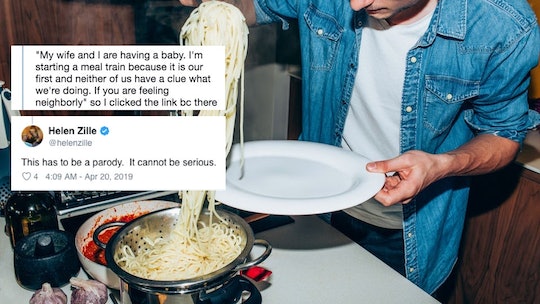 Is "Meal Train Dad" A Spoiled Jerk Or Just A Hungry Dude With Top-Shelf Taste?

Soon-to-be dad Jim Burns didn't expect to set the internet ablaze when he wrote a detailed request for postpartum meals on MealTrain.com, a crowdsourcing platform. But that's exactly what happened, as reported by the New York Post (always a good sign when you become a story in the Post). Burns' innocent suggestion that "you can leave our soft cheeses in a cooler outside our home, because we might not want visitors" and range of recommended recipes, including "Paleo breakfast egg muffins with thinly sliced cremini mushrooms, pork breakfast sausage, and three tablespoons of melted and cooled ghee," and "dry-roasted, unsalted almonds, homemade granola and chocolate peanut butter energy balls" earned the man we will now dub Meal Train Dad a piping hot casserole of judgement (suitable for freezing).

"Trying not to be negative, I figured maybe it's like 'if you make a lasagna and make too much, we would accept it'. That would be very reasonable inside a totally unreasonable ask. BUT THERE WERE 30+ SPECIFIC MEALS WITH RECIPES," tweeted Jack Jokinen, who came across a repost of Burns' Meal Train request on NextDoor — a social network designed, presumably, to allow people to rat on their neighbors. "Turns out they are in fact asking total strangers to help them and with the most millennial phrasing I have ever seen in my life."

Burns' post and Jokinen's reaction sparked an intense internet debate: are we for or against the bold social stylings of Meal Train Dad, a man who wanted to make sure his wife was supported (socially and in terms of creminis) in the difficult postpartum period. Romper's editors were themselves torn, the weekend livened up with a back and forth discussion over what's good, bad, and side-eye-worthy ugly about Meal Train Dad, and the complex response that followed.

April Daniels Hussar: Personally, I think people are being jerks and I'm on the parents' side. Maybe I'm just being contrarian but we tell people to ask for help!

Jacqueline Burt Cote: Ooh, this has so many levels. I totally agree with you, about how we tell people to ask for help and people definitely should feel comfortable asking for help. Like, I would hate to rip these people apart and then make new parents in general feel even weirder about asking for help than they already do. But, at the same time, I mean, some of the aspects of this are pretty over the top. Like, the specific meal requests/suggestions. I can see how that would be off-putting, for sure. Maybe a little note citing food allergies or general likes/dislikes, but...

April: I hear you, I do, but... I would be happy to follow a recipe that I knew someone liked! I honestly think he was trying to make it easier for his friends...? No? Maybe he, being a man, doesn't know that a lot of this stuff is supposed to go unsaid. He is not expecting his friends to do the *emotional labor* of asking around for what they like to eat, and he doesn't know that any mom would obviously think of seeing if they need help walking the dog or whatever.

Jacqueline: Mostly, I'm just encouraged to know that people like you exist, April! It's worth noting that my biggest personal hang-up has to do with feeling weird about asking people for help, so I'm probably a bad judge of this situation.

April: Right! I mean, yes you need a meal train with a newborn, obviously, but I could really use one these days with a full-time commuting job and an utterly neglected family! Not that I hate eating cheese and crackers and olives for dinner — it's actually my favorite meal. I DIGRESS...

... I just wondered to myself if I'd be as easygoing on this guy if he were a woman. Am I just holding him to a lower standard because I assume he is, once again, not tuned in to the finer points of etiquette that we ASSUME ALL WOMEN, CARRIERS (HERE IT IS AGAIN) OF ALL THE EMOTIONAL LABOR BURDEN. The New York Post says he was 'shocked' by the response. His public plea was primarily aimed at 'friends and family.' Honestly, you guys if I sent you this meal train request (WHICH I WOULD NEVER IN 10,000,000 YEARS DO), as I was about to have a baby, would you be as appalled? What if Michael sent it to you?

Danielle Campoamor: Yeah, I’m in the 'dude, we should be encouraging people to ask for help not demonizing them for it' camp. Even with all the details these parents provided, I feel like they did all the leg work and emotional labor to make it as easy as possible for someone to not only help, but help help. Like, they made sure if you helped you weren’t wasting your time by providing a meal that wasn’t going to be consumed or showing up at a time that would’ve actually been intrusive or detrimental. I feel like the negative reaction is kind of proof that not only do we as a whole don’t want to go out of our way to help parents, but if we do help then we want it to be at a convenient time and in a convenient way that benefits us and not them. My two cents! (I could also never actually bring myself to ask for help of any sort or in particularly this way so maybe this is also some kind of hybrid form of parent.)

Jacqueline: Hahaha, Danielle I think you're right about this being some hybrid form of parent — or maybe it just goes back to the thing about it being a dad who did this, not a mom? Which reminds me, the more I think about it the more I wonder about the mom in all of this. I wonder if she was like 'this is a great idea!' or if she was like 'Omg people don't do this kind of thing' and the husband was like, 'Sure they do, it'll be fine, this makes perfect sense, you'll see!' and she was like, 'ok, whatever learn the hard way.' I was also thinking, I would bet anything that people were, in part, put off by the mention of foods they consider 'fancy' or expensive or whatever. I could see some dude who lives on fast food reading the part about cremini mushrooms and ghee with smoke coming out of his ears.

Danielle: I could also see the mom doing the emotional labor of saying which meals would be most beneficial and laying out how people could be most helpful and dude just writing it up and putting his name on it. She was probably on the couch holding baby and directing traffic, recovering from childbirth and still making sure that if people helped they had to think the very minimal amount for themselves in order to do so. And broseph just put his name on it and was the forward-facing person in all this.

Janet Manley: I think it’s got dad written all over it. Like, this was his job and he went to level 99 with it. Moms are so grateful for the bare minimum I find it hard to believe they’d dare list recipes. Of the maybe 20 meal trains I’ve organized, we never got any requests crazier than 'we prefer organic and/or sustainable (sorry!)' in the 'food preferences/allergies' field. And yes, I judge people who expected me to be able to afford to shop at Whole Foods. They get bodega chickpeas and they will like it!

I definitely think the point is not solely the food (my friend complained that her meal train out in the suburbs was a lot of starchy unhealthy stuff they didn’t eat) but someone showing up for you. NOT THAT I WOULD KNOW, but I think it’s good for the soul to have people checking on you but asking absolutely nothing of you as far as entertaining.

l also think people who have more to begin with are *more likely* to ask for help, and more likely to act entitled about it.

Jacqueline: Ahahaha, that's exactly what I was picturing, Janet — the dad sitting down at his keyboard, cracking his knuckles: 'It's about time somebody showed these people how it's DONE.' All of those meal train details are so fascinating to me — I feel like you could probably do some kind of very important study with that data.

So, to get an actual dad perspective, I just ran this whole thing by my husband (who, for the record, isn't great about asking people for help either). His first reaction was to roll his eyes, but then he thought about it for a minute and said, 'Well, this guy was probably figuring the worst that could happen would be nobody makes the stuff he wants — but somebody MIGHT.' And that just so totally summed up the vast divide between moms and dads for me: the 'worst that could happen' for a mom would be more along the lines of 'we'd be shunned from our community and mocked forever and our kid's life would be ruined.' For a guy, it's like, 'Eh, maybe I don't get that one stew I like.'

Janet: LOL, yes agree with all of this.

Danielle: Yeah, I just feel like even if this is a dad doing the most we shouldn’t be harping in him, we should be encouraging parents — especially moms — to do the same. Perhaps not exactly the same way, because there’s a lot to say about class and finances and whatnot, but like, take this dude’s perceived audacity and bathe yourself in it, ladies. Let’s hope this 'soft cheeses and brioche buns only' mentality rubs off, instead of staying in our collective 'please sir may I have some more' mindset. Let’s all be a little more like Meal Train dad. Maybe if I had that kind of 'what’s the worst that could happen?' swag I wouldn’t be locking myself out of my apartment at 7:00 p.m. with my two kids after going to get delivery for the fourth time in five days because I haven’t slept in two weeks and I’m convinced that our neighbors — including one who happens to have been a nanny for 10 years! — offer to help out of obligation and not because they’re actually willing to help.

We need to be this dad cracking his knuckles saying THIS IS HOW IT IS DONE B*TCHES. Or at least leaning towards his direction. I’m also rambling and I do agree with Janet that people in better financial positions or coming from places or privilege are definitely more willing to ask for help and in such a detailed way. And I will say that if someone asked me for all this I’d be like, 'Yeah dude, love to help but I legit can’t feed my family this type of food.'

Jacqueline: I mean, that is a very good point. Because it definitely should not be the norm for us to be so overwhelmed that we're locking our poor exhausted selves out with our babies (you poor thing!) when possibly people WOULD help, if only we could bring ourselves to ask. And then there's the whole thing of how your family was about asking for help when you were growing up, I suppose. My family was very 'you don't ask for help, you don't let non-family know the family's business.' There are a shocking number of layers to this.

More Like This
Baby-Led Weaning: A Comprehensive Guide To Introducing Solids
Here's How To Keep Your C-Section Incision Dry
20 Bridgerton-Inspired Baby Names
30 Adorable Baby Halloween Costumes, From Animals To Avocados