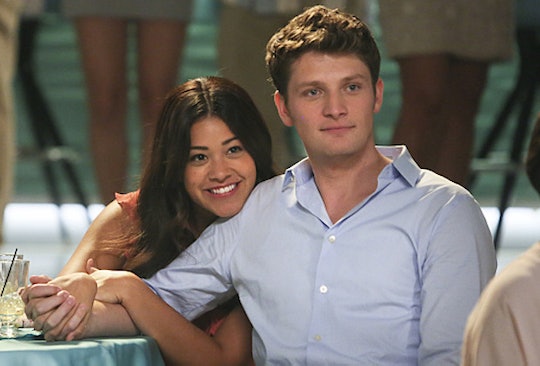 How This 'JTV' Tragedy Could Be A Good Thing

If you're like me, you're still mourning from poor Michael's death. Let's face it, it's just not fair. Michael and Jane were perfect together; they were even thinking about having a kid! They were on track and everything was great until the Jane the Virgin writers decide to pull the rug out from under us. (Sorry, I'm still a bit bitter about it.) Even so, although I'll miss Michael terribly, the truth is the show isn't really about him, it's about Jane. So here's why Michael's death on Jane the Virgin isn't necessarily a bad thing.

The show began with a major turning point in Jane's life. Even though she had planned on waiting for marriage to have sex due to everything Alba had taught her, Jane still ended up pregnant after accidentally getting artificially inseminated by Rafael's sister, Luisa. That accident turned Jane's world upside down, and although Michael's death is much more tragic than that, it's still a major turning point in Jane's life. Jane, who loves lists and schedules, had her life on track. She was married with a kid; her husband and child were getting along; she just finished writing her first novel; and she got a full time job with benefits while Michael was taking the LSATs to launch his new career. Her timeline was so perfect she was even considering having a baby with Michael sooner rather than later.

However, Michael's death completely shifts her off course. Where does she go from here? How does she pick herself back up from this tragedy? Will her opinions about waiting until marriage to have sex change now that she's no longer a virgin anyway? There are a lot of questions that Michael's death now pose and this gives the show an opportunity to challenge Jane and push her in a whole new direction.

Though I would've been happy to see Michael and Jane live long and happy lives together in marital bliss, Michael's death gives us the chance to see a whole other side of Jane. It also gives Gina Rodriguez a lot to work with as an actress. Every time I see Jane's breakdown when she gets the call about Michael, I get chills.

It'll be interesting to see how the show transitions into this whole new kind of show without Michael, especially when you factor in the three year time jump as well since it's given the characters some time to adjust to the new world they live in sans Michael. Jane won't be the only one affected by Michael's death and she's not the only one whose life will change in three years. I'm excited to see where the characters are now and how much has changed. While I'll continue to hold a vigil for Michael, I'm ready to see what comes next.