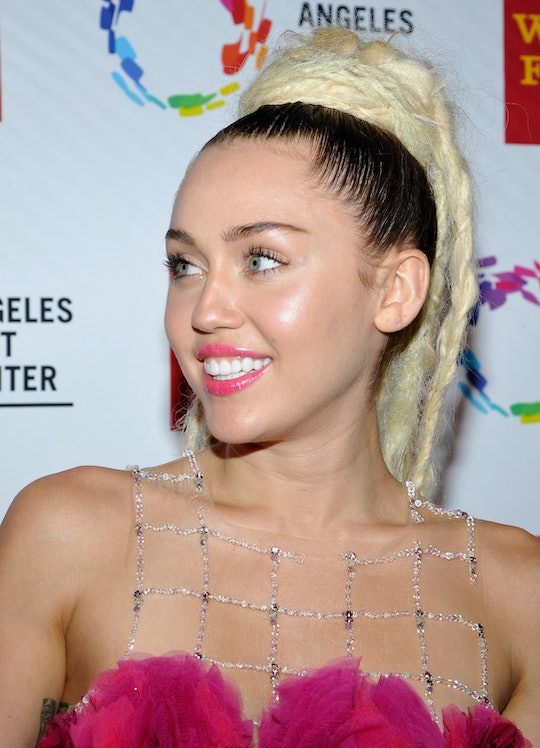 Regardless of what you think of her, it’s undeniable that Miley Cyrus knows how to get people talking. And it looks like she’s at it again, appearing nude in V Magazine’s Winter 2015/2016 issue, "Diary of a Dirty Hippy." The profile on Cyrus, written by RuPaul Drag Race season six contestant Laganja Estranja, the drag queen touted the singer, calls Cyrus a “trailblazer” in and outside of her industry — mainly for her work in shining a light on LGBT issues. The profile and photos also fall right in line with Cyrus self-identification as a feminist.

Estranja, who performed with Cyrus at the MTV Video Music Awards in late August, commended the singer for giving drag queens' craft a huge platform and (along with RuPaul) helping bring it into mainstream pop culture. Estranja wrote:

I have to thank Miley for f*** s*** up and teaching the nation through alienation, because we can’t do this by ourselves. Nobody can fight for equality or bring visibility to the marginalized singlehandedly. We have to talk together, work together, create art together, and maybe then we can carve out a solid place in the sun for a once underground subset of society. I look forward to this journey, because we are just getting started!

Unsurprisingly, Cyrus bared all in the photo shoot:

And while the word feminism is never used in that quote, this description and the accompanying photos are further testament to Cyrus' feminism. One of the things that sticks out about this feature isn’t her nudity but the fact that she used her platform to focus on a group that is constantly ridiculed, mocked, and are even the target of violence and creatively included them in the process. And when it comes to being a feminist (which Cyrus identifies as) being intersectional and inclusive is so, so important.

But if we need to focus on the fact that she posed nude for our eyes to see, which is something she has done before (NSFW), it should go without saying that that she clearly feels comfortable with herself and her sexuality. Miley embraces all things taboo and raunchy, because she seems to like it. That's her choice. And ultimately, she isn’t hurting anyone by just being Miley.

Reading the feature and looking at these photos, the main takeaway should be that though eccentric at times, Cyrus is dedicated to equality, her music, and all things fab. As Estranja wrote: “YAS GAWD Miley Cyrus, YOU did that!” and good for her.