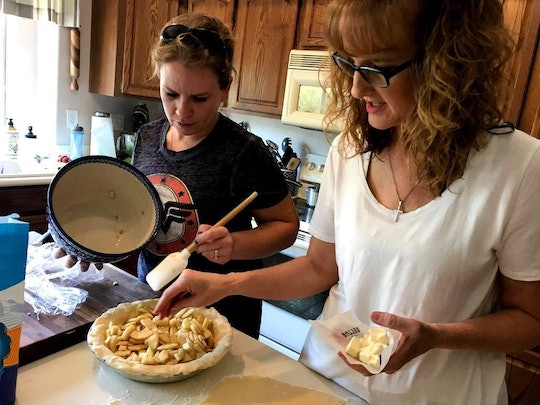 “She is the closest thing to a mother I have in my life; I trust her completely, I know I can tell her anything without judgment, I know she supports me and loves my family unconditionally.”

Jen Salinas-Holz is talking about the one-time work friend who became her “chosen mother” after Salinas-Holz lost her infant daughter in her twenties.

This Mother’s Day, many women will be celebrating with surrogate parents they have chosen to fill the role of mother or grandmother. They stumble into mother-daughter relationships at work, through friends, or through marriage — for many women, their mother-in-law has become one of their closest relationships. And these “mothers” are perhaps an under-appreciated support for families across the country.

Renee Adams found her chosen mother after the passing of her biological mother in 2005 from a lengthy illness. After her death, Adams yearned for a maternal-type relationship, especially in the years leading to the birth of her children. Adams met the woman whom she refers to as her “other mother” at her wife’s office.

“Nana (as we fondly call her now) and I formed an instant relationship. She made me feel special, welcome, and loved. To that extent, a maternal bond was formed,” she tells Romper. “During the next several years, we developed a very close relationship, often sharing major family events and vacations.”

We asked if she would mind if we called her Nana. That was it. She has been by our side through thick and thin.

When Adams and her wife discovered they were pregnant they knew that they wanted Nana to be their child’s grandmother.

Adams beams with excitement as she shares with me her story. “We went to her home the day we had our first ultrasound. We had her hold out her hands and close her eyes. The picture was placed in her hands and when she saw the photo, we asked if she would mind if we called her Nana. That was it. She has been by our side through thick and thin.”

As I was giving birth to my first child, I knew I wanted the women in the room that had shown me unconditional love and support. I wanted the women beside me that knew how to fill a room with palpable affection and that believed in my fierce ability to birth a child. These were the women that helped me to find my courage, my strength, and that acted not only as my maternal mentors in life, but as my chosen mothers.

Artist, performer filmmaker, Annie Sprinkle and her wife Beth Stephens, an artist and professor at UC Santa Cruz, have been lovingly present at every major event in my life, providing support, wisdom, and strength. The two women officiated my wedding to my husband and then accompanied us to our legal ceremony at San Francisco City Hall. They were present for the birth of my first child, and came to the labor of my second child, where they lead a blessing ritual.

And when same sex marriage became legal, I accompanied them to City Hall and had the great honor of serving the role of maid of honor. We even buried the placenta from my second birth in their backyard under a tree in their garden. We spend holidays together, go camping together, and the two women take on the role of not only of mother figure in my life, but of grandmother in my children’s lives.

Having two open-minded queer women in my life filling the role of chosen mothers helped me to grow into the woman and mother that I have become.

My own biological mother and I have had many emotional challenges through my teenage years and into my early 20s. And although my biological mother and I now have a very strong and healthy relationship, it took a lot of work to get there and she was not always totally accepting of my relationships, my sexuality and my decisions. Having two open-minded queer women in my life filling the role of chosen mothers helped me to grow into the woman and mother that I have become, with the emotional support and love that you hope to receive from a mother figure.

The often-derided mother-in-law was cited by many of the women I spoke to as the primary source of love and support in their lives.

For Katie Jackson, she and her mother in-law saw each other as kindred spirits from the beginning, and over the past ten years they have developed a meaningful and loving relationship. Jackson goes on to share with me that her mother in-law is a steadfast supporter and cheerleader who shares wisdom and adventures, and is a sounding board and wealth of knowledge.

“My mother in law is someone I can call any time to just chat or sort through problems. She lives four and a half hours away and will drive over to see our kids even if it is just for one afternoon or overnight. To be honest I worried somewhat about whether she would bond with our daughter Marlowe, as I gave birth to her and not my wife, but she loves Marlowe and treats her as her own grandchild.”

“We talk about parenting and life. She shares wisdom and insight. I think for me she fulfills the role of having a present and engaged Mom, and for her I am like another one of her daughters but am unlike the daughters she gave birth to.”

A lack of acceptance from family was a common theme for women who looked for a mother figure elsewhere.

Jordon Johnson’s biological family stopped talking to her after shortly after she met her wife. In their absence, her chosen mother has filled the role of role model, confidant, and her greatest support.

“I feel like I can go to her for anything and I know she will help me through problems. She listens to me and I don't feel like I am being belittled. Aside from my wife, she is my biggest support.”

Other women maintain ties to their biological parents, but find that a chosen mother can fulfill a different role.

Adams says that she didn’t set out with the intention of finding a chosen mother. This important person simply entered her life when Adams and her wife were beginning their “grown-up life” — buying a home, planning a family, and doing the things that one would want their mother involved in to share experiences.

“Nana became my other mother somewhere in the midst of all this growing up,” she explains. “In turn, I became her daughter. We became a family.”

More Like This
Molly Yeh Draws The Line At Hot Pockets
Home Reno Culture Makes Me Feel Like I Live In A "Before" House
I’m Getting Dual Citizenship For My Jewish Children, Just In Case.
Meghan Trainor's TMI Life