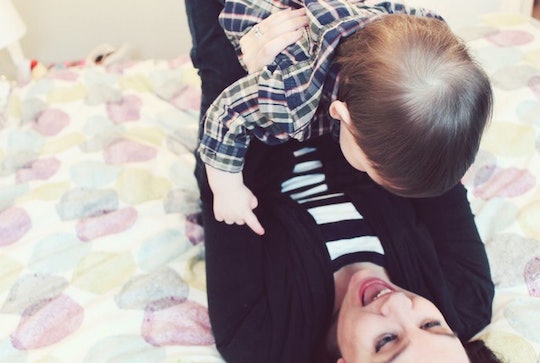 I gave birth to my twins early on a Friday morning after about 10 hours of labor. They arrived 20 minutes apart after a few pushes and an unexpected C-section, but it wasn’t until hours later that I was actually able to see them for the first time. They were born much too early, at only 25 weeks gestation, and were whisked away to the NICU almost immediately — the place they’d call home for almost the next four months. I waited three long days to hold my daughter for the first time, and two agonizing weeks to hold my son. This, and so many other realities of NICU life, were awful and heartbreaking at the time and something I wouldn’t wish on any new parent. But as hard as it was then, I never expected that, almost three years later, not holding my kids after their birth would be even harder on me now.

Life with two tiny preemies in the hospital was unbelievably difficult. We knew what a long road we had ahead of us before we could even think about going home, and we also knew that something could go wrong at any moment that would keep us from ever being able to actually do that. There were days during those first four months that I never thought I’d even get through — the day my daughter had her first brain surgery, for instance — and days I would have chopped off both of my own arms to not have had to experience. I became incredibly skilled at compartmentalizing, turning off the thoughts and mental processes that I couldn’t bear to think about because it was far too overwhelming.

I often wonder: What kind of mom would I be now if it had all gone according to plan?

I look back now at the days we spent in the NICU, and I remember how well I generally held it together. I was able to chat and laugh with the twins’ nurses (some of whom had become like family to us). I was just as eager as any other new mother to snap a million iPhone photos of the babies to share with our friends and family. And I was able to go home every night, leaving my children in the care of doctors and nurses like it was the most normal thing in the world.

Had the gravity of the situation actually hit me back then, if I’d known just how terrible things were and could continue to be, I probably wouldn’t have even been able to get out of bed.

I’m grateful for that little bit of helpful mental trickery, however involuntarily it came to me, because it meant I was able to get up each morning, put one foot in front of the other, go to the hospital and be the happy, loving, nurturing mother my children needed. Had the gravity of the situation actually hit me back then, if I’d known just how terrible things were and could continue to be, I probably wouldn’t have even been able to get out of bed. But the downside of those coping skills is that they were only temporary, and now that everything is wonderful and fine, the memories of everything we went through hit me like concrete bricks hurled off the side of a building. While I’m standing below it.

When my daughter was 18 months old, she became dehydrated after getting a stomach virus and needed to be hospitalized. It wasn’t serious, and she was totally fine after lots of I.V. fluids and some Zofran, but being back in the hospital like that wasn’t fun for any of us. After she was admitted, her nurse told us that we’d definitely be spending the night, and maybe a day or two more after that depending on how she does.

I think about those things now — the normalcy of having to ask to hold my babies, or having to leave them alone each night — and it’s hard to imagine. In fact, it’s even become hard to recall, because remembering that stuff hurts so badly that I sometimes feel like I could vomit on command.

“We won’t be putting anyone else in this room, so you can go ahead and make yourself at home,” the nurse said. “I’ll bring you some extra blankets and pillows for the other bed to make it a little bit easier for you to sleep tonight.” It took me a minute to realize that I wouldn’t be leaving Madeleine in the hospital that night. I mean, I knew that of course I wouldn’t be leaving — I’m her mother and she needs me and I’d sleep on the floor beside her if I needed to. But leaving her alone had at once been so second nature to me, so sadly automatic, that being expected to stay with her felt like a special privilege instead of my parental right.

I think about those things now — the normalcy of having to ask to hold my babies, or having to leave them alone each night — and it’s hard to imagine. In fact, it’s even become hard to recall, because remembering that stuff hurts so badly that I sometimes feel like I could vomit on command. It was so easy back then. It had to be.

Sometimes I wonder how I’d be different if I’d had a different kind of birth. If I’d made it until the end, with a giant twin belly and a hospital bag waiting at the door for when my water broke or the contractions started. I think about what it might’ve been like if I’d pushed my children out and they’d cried right away, being placed on my chest for immediate skin-to-skin time. I imagine holding them, one in each arm, and looking down at them, exhausted and overwhelmed and in love with the two little people who’d been living inside of me for the past 10 months. I often wonder: What kind of mom would I be now if it had all gone according to plan?

Less scared, probably. Not quite as traumatized. Able to look at photos and videos from when my kids were small without bursting into tears. I can’t help but think of all the beautiful first moments that we missed, the ones I always thought we’d share together. But the truth is that, even though the first days and weeks and months of our time together were sad and scary, we’ve been lucky to share so much more together since then. All of the hugs and kisses and laughs and love we have now might never erase the pain I feel about our beginning. But it definitely makes it feel less important.

More Like This
Paris Hilton Is Officially A First-Time Mom
When Does A Baby Recognize Their Father? A Pediatrician Explains
Mom Gives Birth To Record-Breaking 16-Pound Baby
40 Valentine's Day Outfits Your Girls Will Adore Showing Off This Season
What Parents Are Talking About — Delivered Straight To Your Inbox