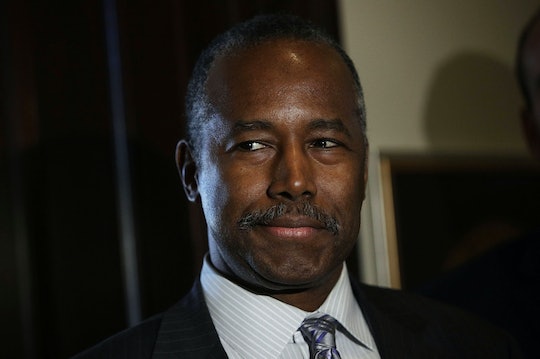 Since becoming president, Donald Trump and his administration have consistently appointed individuals to cabinet positions irrespective of their professional — let alone political — experience. While the Republican half of Congress has, for the most part, supported these appointments, there have certainly been a few controversial ones. The most recent appointment, while it follows the trend of appointing individuals who lack experience commensurate with the position, didn't seem to divide Congress quite so much. That doesn't mean there isn't cause for concern, however. Here's why parents should care about Ben Carson as head of Housing and Urban Development, because HUD's work is really about families.

President Trump made his intention to offer the position of HUD secretary to retired neurosurgeon Dr. Ben Carson several months ago, though Carson's appointment was only confirmed by Congress Thursday morning. Carson lost the Republican nomination for president to Trump in 2016. After the loss, Carson said that he would not consider a cabinet appointment by the Trump administration because he felt that he had "no government experience," according to The Week. But, perhaps seeing that that hasn't stopped anyone else from taking appointments, it appears Carson has changed his mind. During his confirmation hearing, he testified that he feels qualified for the position in HUD — despite the fact that his background is in medicine and not something like urban planning, business, or even real estate — because he grew up familiar with government programs like subsidized housing and food stamps, according to The Washington Post.

What Does HUD Do?

HUD is basically responsible for overseeing the federal government's involvement in the housing market, and any policies that might impact housing for the American people. HUD is also responsible for enforcing laws that prevent cities from segregating housing or discriminating against people who seek housing, and developing more housing to accommodate growing populations.

How Does HUD Affect Families

If you own a home, or would like to eventually, the activities of HUD will matter a great deal to you. They control a lot of budgetary and legislative factors that can impact how much it costs for people to buy a home. They also control programs that offer assistance to people who want to buy homes, as well as programs that help low-income families get housing that's affordable. If you have ever lived in Section 8 housing, for example, that's a federal program that is directly controlled by HUD — and subsequently at the mercy of whoever is leading the department.

During his confirmation hearing, when Sen. Thom Tillis, the Republican from North Carolina, asked Carson what he thought the department should do for people on government assistance, Carson responded: "Get them off of it." Though it's unclear just how that would happen.

HUD is also responsible for helping communities prepare and recover from natural disasters. If you live in an area that is prone to hurricanes, floods, or tornados, the decisions that HUD makes in terms of allocating funds in the event of a disaster could have a direct impact on what happens to your family in the aftermath.

Things like the cost of buying or renting a home have a close relationship to what else is happening in our economy. Theoretically, if people can afford to move to areas where there are more jobs, they can get out of poverty. The problem is, in many places, the cost of living is so high that families can't make that move. Living somewhere without public transportation if you don't have a car, for example, is just one way that the cost of home ownership or renting can interfere with someone's ability to earn a reasonable living. Decisions that HUD is capable of making can either alleviate or worsen these stresses.

Where your family lives also has a direct impact on your kids' lives and opportunities: you may want to move them to a better school district, but you can't afford another town's property taxes, or the houses are all way out of your price range. You may be living in a neighborhood with a high crime rate, which makes you fear for your child's safety — but if you can't afford the rent in another part of town, you may not be able to move elsewhere.

Harvard research from 2014 showed that when families were given housing vouchers by HUD that permitted them to move into better neighborhoods, with better school systems and social support, the kids were more likely to go to college and earn higher incomes.

In 2015, Carson penned an op-ed in response to these programs wherein he accused HUD of "social engineering":

These government-engineered attempts to legislate racial equality create consequences that often make matters worse. There are reasonable ways to use housing policy to enhance the opportunities available to lower-income citizens, but based on the history of failed socialist experiments in this country, entrusting the government to get it right can prove downright dangerous.

The ultimate worst-case-scenario for many families — losing your home and having nowhere else to go — is also something that HUD is in charge of addressing. In this sense, there really isn't anyone who can say they aren't in some way affected by the decisions that HUD makes. Any of us could become homeless, and if there are no programs — or "safety net" — for us, the prospects are grim.

In his confirmation hearing, Carson alternatively talked of cutting and expanding government programs that would have a direct impact on all these issues. The reason for his vagueness may be that he isn't exactly sure what he'll do, but now that his confirmation has been confirmed he's going to have to figure it out — because he's got 125 million American households hanging the balance.