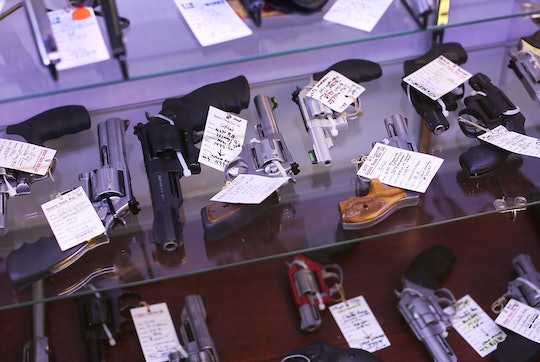 Why Parents Should See The ‘Under the Gun' Documentary, Even If They Support Gun Rights

As a parent, it's hard for me to even think about the Newtown shooting at Sandy Hook Elementary. My twins were born the very same day that 20 young children were shot and killed in school by a murderer with a gun — December 14, 2012 — and the thought that my children were entering the world just as so many other parents' children were leaving it turns my stomach. But that reaction — the practically-universal heartbreak parents everywhere felt after Sandy Hook — was part of what made journalist Katie Couric and director Stephanie Soechtig create their documentary Under The Gun. In it, they take a look at the actual state of gun safety laws in the United States, and what they discovered was a surprisingly different message than the one Americans often hear. The reality is eye opening, and it's why parents should see Katie Couric's Under The Gun — even if they support gun rights.

As Couric noted in an interview on the TODAY show Friday, while gun safety usually comes across as a black-and-white, for-guns-or-against-guns issue, there is actually a lot of overlap in the opinions of gun owners and non-gun-owners when it comes to gun safety. So why is it that hardly anyone realizes that the majority of Americans are on the same side of the issue? According to Under The Gun, it really comes down to the powerful gun lobby.

While gun safety has long been a hotly debated topic, Under The Gun suggests that it seems as though we've all been duped about what the real issues actually are. So often, the debate seems like it is a question of whether or not owning guns should be legal — something that many people have strong, opposing opinions about. But according to a review in the Los Angeles Times, Couric dispels that major myth in the film, noting that "the Supreme Court has already enshrined private gun ownership as a right," meaning that there is no actual danger that Americans will have their guns — and their Second Amendment rights — taken away from them. So why are we still talking about it?

The reason, Couric said on TODAY, is that arguing about the right to own a gun is distracting the country from the incredibly lax — and in some cases, straight-up bizarre — laws and policies about gun ownership in the United States, influenced heavily by gun rights advocacy group, the National Rifle Association of America. In an interview with PopSugar, Sandy Phillips explained how the NRA misleads its members into effectively arguing against gun safety — and if there's anyone whose been on both sides of the issue, it's Phillips. Prior to 2012, Phillips was a proud gun owner and a supporter of what she thought was the NRA's quest to protect her rights. And then her daughter, Jessi Ghawi, a 24-year-old aspiring journalist, was killed by a shooter in a movie theater in Aurora, Colorado, and she was forced to look at things differently. She told PopSugar,

The gun lobby has done such a good job of reducing the effectiveness of existing laws. So while the NRA is saying 'just enforce the laws that we have on the books,' they aren't saying 'we've made those impossible to enforce.'

What kinds of laws has the NRA interfered with? According to PopSugar, the film highlights the fact that, "the U.S. has more regulations on teddy bears than there are on guns." What's more, according to Soechtig, is that "40 percent of guns are sold without a background check." In fact, to test just how easy it is to purchase a gun in America, one of the film's producers successfully purchased the same type of rifle used in the Sandy Hook shooting, and to everyone's surprise, it was incredibly easy. Soechtig said,

What most people may not realize, though, is that the majority of gun owners actually do support background checks and responsible gun ownership and purchases. And, as the film aptly shows, many of them disagree with the laws the NRA has had a hand in shaping — like the fact that someone barred from flying on the government's terrorist watch list can still legally purchase a firearm. Very few would likely also realize that the Bureau of Alcohol, Tobacco, Firearms, and Explosives (ATF), responsible for overseeing gun laws, isn't even legally able to use computer databases, lest it interfere with gun owners' privacy, thanks to the NRA.

What the movie proves is that, when it comes to gun safety, Americans actually aren't that divided. According to People, Couric found that, after Sandy Hook, a whopping 90 percent of the population was in favor of universal background checks for gun ownership, and yet, instead of discussing ways to reduce gun violence, most of the rhetoric surrounding gun safety focuses on whether guns are good or bad.

That distinction is why Under The Gun is important for all parents to watch, regardless of their views on guns. As Couric told People,

This is not an anti-gun film, it's an anti-gun violence film. And everybody agrees that violence needs to be reduced.

But don't take it just from her. There are a number of parents who have lost children in the film, and the pain is there on their faces. They do not want anyone to go through losing a child to gun violence.

Want to watch Under The Gun? The film will premiere on Epix on May 15 at 8 p.m. Eastern Time during its free preview weekend (so you can watch even without a subscription) and can also be streamed online on the Epix website.