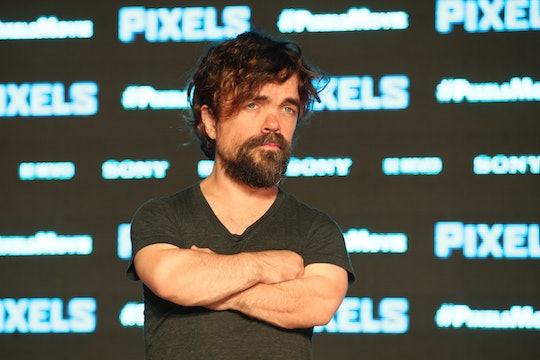 Actor Peter Dinklage — aka, the man who plays the very best character on Game of Thrones — has some pretty exciting things going on in his personal life: On March 2, People shared that Dinklage and his wife, theater director Erica Schmidt, are expecting their second child. That's right, I said second. But don't feel bad if you didn't know that the actor was already a father: Dinklage keeps his daughter out of the spotlight as much as he can, so his parental status isn't exactly common knowledge. In fact, Dinklage hasn't even divulged his daughter's name or exact birthdate to the press, according to Us Weekly, and he has good reasons for trying to protect her privacy.

"I am so protective of everything that society has to offer," Dinklage told The Guardian in 2015, citing a concern that many parents in this day and age share. "She is still very young."

His fame, he explained, can often make it feel like the public is snooping at times, and if his daughter is around, she can be dragged into that. As he told The Guardian:

I would give anything to be an actor back in the day when people would see you and go, ‘Oh, I wish I had a camera.’ Now everybody has a camera. Any time someone asks me, ‘I love your work, can I have a picture?’ I will do it – but it’s the sneaking of the photo I don’t like. It’s hard when you have your kid with you and you feel everyone is just spying and not really living in the moment. Nothing is private any more.

Schmidt and Dinklage now live in upstate New York, further from the crowds. "I have a little place in the woods where I tend my garden. I like privacy and all this [press] is not my thing. I’m not jetting off to another fancy place after this," he told The Guardian.

In 2012, he told Rolling Stone that he was enjoying the peace and quiet in upstate New York, where his daughter could have her own room. According to People, he said in past interviews: "Game of Thrones fans are the nicest people ever, but a thousand nice people coming at me gives me claustrophobia. ... I can’t wear a pair of sunglasses and pull my hat down and just disappear. I’m 4½ feet tall, so I sort of stand out."

It makes sense that Dinklage would want to spare his daughter the spotlight that he himself isn't such a huge fan of. And that's a great thing: when she's older, she'll be able to decide for herself whether she wants to make her life a little more public or not, but until then, she'll have the safety of privacy.