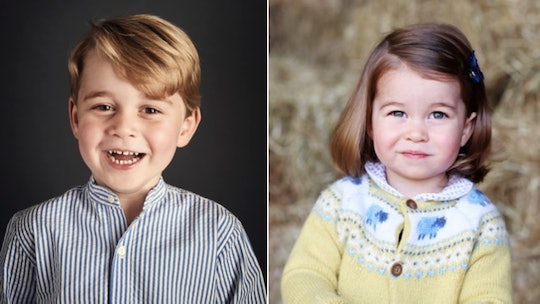 They're equally adorable royals whose childhood fascinates the rest of the world. Prince George and Princess Charlotte may share a rare status as being among the world's most-watched and most-photographed kids, but they're still part of a regular family at the end of the day. For example, the reason why Prince George and Princess Charlotte have attended different schools is pretty simple and is just one of those down-to-earth decisions every family has to make.

Basically, it boils down to a family move. Prince William and Kate Middleton, the Duke and Duchess of Cambridge, haven't always lived in London with their adorable brood. In the immediate years after tying the knot, according to CNN, the couple lived in a rented farmhouse on the remote Welsh island of Anglesey. This private lifestyle away from the city was part of an agreement with Queen Elizabeth II that the young royals be given time out of the spotlight to adjust and enjoy married life before they would be expected to return to their duties, according to Vanity Fair.

Then, the couple moved into Anmer Hall, a country estate near the Queen's Sandringham Castle, in Norfolk, England, according to Vogue, which was the family's first home together, as Hello! Magazine noted. Fast forward a few years later, and Prince George, the couple's firstborn, was ready to start preschool in 2016. The nearby Westacre Montessori School in Norfolk suited just fine, according to People, and Kensington Palace shared the most adorable photo of a backpack-clad Prince George on his first day.

But like most families, the Cambridges had a change in their job status and had to relocate themselves.

In January 2017, the couple relocated to London and assumed full-time royal duties "on behalf of the Queen," according to CNN, getting more involved in charity work and making more official royal appearances. And with the family now ensconced at Kensington Palace, Prince George and Princess Charlotte both ventured off to new schools. According to Business Insider, after their move back to London, Prince George started elementary school and Princess Charlotte started preschool.

Just like any other family, Prince William and Duchess Kate picked a great preschool for Princess Charlotte close to their new address: The Willcocks Nursery School, next to the capital's famed Royal Albert Hall, according to Hello! Magazine.

On the young royal's first day of school, Kensington Palace shared this adorable photo of her, taken by Duchess Kate herself.

Prince George, meanwhile, has been settling into "big boy" elementary school at Thomas’s Battersea, where he started last September, according to People. As you might recall, when Prince William dropped him off for his first day, Prince George looked little bit nervous and little hesitant to start his big day.

The parents haven't shared their elementary school plans for Princess Charlotte just yet, but if they stay where they are, it seems they'd enroll her in Prince George's school when she's older.

Now that Prince William, Duchess Kate, and the kids are settled into the rhythm of London life, they still seem to get out of the city for summer vacation, with the family having reportedly just returned from a Caribbean vacation with Middleton's parents, according to People.

It's fascinating that although the royals seem to have fairy tale lives, essentially they are just like the rest of us, have typical responsibilities, and have to make logistical decisions like everyone else. From Duchess Kate photographing her kids herself, to recycling her wardrobe, to letting her kids roll around on the grass, the Cambridge clan truly seems like a modern family you might know.

Now that Prince George and Princess Charlotte have gotten settled into their respective schools, the Cambridges' schedule will look a lot like every other parent's in the fall. Get ready for early morning drop-offs at different places and daily back-to-school lunch packing for picky eaters. Good luck!