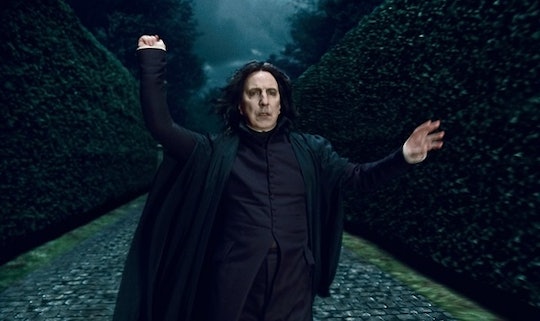 For those of us that have been Potterheads for all of our adult lives, the death of our own, much beloved Severus Snape is almost too much to take. Early on Thursday morning, reports trickled in that actor Alan Rickman died at age 69 after battling cancer. Even with all of the films completed, and with Snape's story done, the Harry Potter universe will never be the same. As a proud Potterhead, I will never be the same. Because every time I snuggle up with my kids to watch a Harry Potter film, I'm going to mourn an actor whose work I loved and who so perfectly captured the character he played.

Each one of the Harry Potter movies are so great at taking the books I love and breathing fresh life into them. I don't think I've ever quite felt that way about other adaptations. Hagrid may not have been exactly how I'd pictured him, but I remember, sitting in the theater watching that first movie, just how perfect Alan Rickman was as Snape. Knowing what I know now, Professor Snape was the backbone of the films. I didn't realize it until I finished the entire Harry Potter series, but once I did, nothing about his character would ever be the same for me.

When the first movie was released, I didn't know what a vital role Snape would play in the series. At that point I'd only read the first few books, and I was still staunchly appalled at how unfair he was to Harry and the entire Gryffindor crew. Whatever doubts I had about adapting the books to film were swiftly put to rest in that first moment Rickman appeared onscreen. He locks eyes with Harry and the disgust he feels is palpable. To say nothing of his voice, and how I knew how much it would unnerve me to be sitting in his Potions class and hoping he wouldn't call on me. He was Snape. Perfectly.

Looking back, there was always something sitting just beneath the surface of Rickman's Snape portrayal. It was untouchable, but it was there. Every move, every comment. His presence always hinted at something. It just took Rowling years to give us exactly what that was.

That's when I really realized what a great actor he was. It's so easy to love him as Colonel Brandon or as Jamie in Madly, Truly, Deeply or his hilarious deadpans as Dr. Lazarus in Galaxy Quest. But I loved him as Snape most.

The depth of Snape's character was always there in Rickman's performance. Even as his true persona took years to unfold, Rickman played Snape perfectly from the first moment. It was all there, and it was only later that we were able to connect the dots. The movies, more than the books, had me on the lookout for Snape's redeeming qualities. Because in Rickman's hands, he was more than an nemesis; he was a deeply unhappy wizard.

Snape's arc through the story is one that makes me emotional more than any other character. And I believe that is in no small part to Rickman's portrayal. The clues were always there. In between sneers at Harry, Rickman showed us that Snape was vulnerable and unsure. No more so than when he kills Dumbledore. That moment absolutely kills me. And I've done no small amount of crying over that death and Snape's part in it over the years.

Surely Rowling could have chosen anyone to play the surly potions professor, but of course, Rowling knew of Snape's depth and his love for Lily Potter above all things long before she ever informed the public. She knew the actor that played him needed to convey loathing and caring and pain every time he glanced at Harry. And Rickman did that. Flawlessly. I can still hear him saying "Harry Potter" in his disdainful voice better than I can recollect any other moment from the films.

But upon hearing of his death, of course my thoughts flew to Snape's final moments. Despite his immense body of work, I know I'm not alone in tying his death with Snape's. And I don't think Rickman would mind having Snape be one of his more remembered role. There are so many actors who turn their noses up at their most popular roles, but Rickman was not one of them. Because Rickman was as passionate about those years of his career as any other. He's shared his thoughts on what it means to be a part of such a beloved series, signing off with:

It is an ancient need to be told in stories. But the story needs a great storyteller. Thanks for all of it, Jo.

It's always been crystal clear that Rickman felt fortunate to have been such an integral part of stories that I'm sure will continue to be a part of millions of childhoods. At the time, he thanked Rowling, but his passing affords us all an opportunity to thank him as well. Rickman was a part of my youth and he'll no doubt hold an important place in my kids' too.

As a mother, one of the most magical moments has been sharing the stories that I love with my kids — namely the Harry Potter series. My partner and I have read the first three books with our son, and he's now seen the first three movies. It's so bittersweet knowing the stories that are still in the future for him have ended already for Rickman. For my son, Snape is still very much alive. Despite his passing, alive is very much where Rickman and Snape will stay for us.

I can't wait for the gravity of Snape's role in the Harry Potter saga becomes clear for my son. One of the best things about being a parent is getting to experience things for the first time, again. I know my son feels the way I did about Snape when I had only read the first three books. He can't believe how mean he is. He was surprised that Snape was protecting Harry from Quirrell in The Sorcerer's Stone. And even though Dumbledore swears up and down that Snape can be trusted, my son still thought that it was surely Snape who opened The Chamber of Secrets. I'm in no hurry to get through the books and the movies with my son. I want to savor it all. But I am so looking forward to discovering Snape's story for the first time with him. And I love that Alan Rickman portrayed all of that so masterfully.

In his last moments, I wonder what memories Rickman would have chosen to extract from his mind to be viewed in a Pensieve. Surely his importance to the imaginations of children would be included. He loved being a part of the films. And by all accounts, he relished the fact that he got to watch the young Daniel Radcliffe grow into a serious actor. Maybe he'd recall his phone conversations with JK Rowling when she gave him an inkling into the depth of Snape's character. In so many ways, Snape will always be immortal, and it goes beyond any cavorting he may do in the Hogwarts hallways with Nearly-Headless-Nick. It has everything to do with how gracefully he played an icon.

Farewell Alan Rickman. I hope you continue to peer disdainfully out of a portrait in Hogwarts. I hope they have endless droppers of Felix Felicis in heaven. I hope Lily Potter thanks you for looking after her son, as I thank you for being such a crucial part of my life and my son's. Today I'm going to proudly raise glass of Ogden's Old Firewhisky in honor of a life well-lived. And if you're wondering if we'll miss you, the answer is: