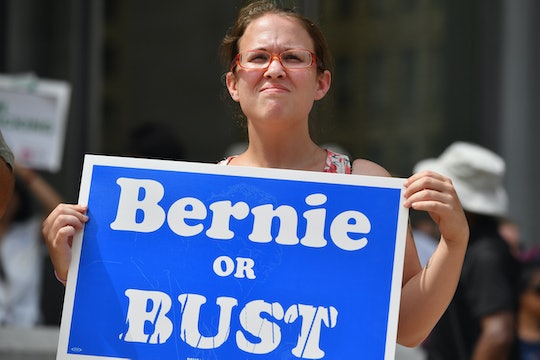 It's official: Former Secretary of State Hillary Clinton is anticipated to clinch the nomination at the Democratic National Convention while billionaire Donald Trump will likely be named his party's nominee at the Republican National Convention later this month. Despite all the flaws of a two-party political system, refusing to vote for Clinton could be disastrous for millions of Americans if Trump wins the election. Even so, spurned voters who didn't see their candidate of choice secure their party's nomination have little to lose if they refuse to vote for Clinton and vote for Trump instead.

Let's not mince words about who we're talking about: Supporters of Vermont Sen. Bernie Sanders are feeling pretty burned themselves after Tuesday's primaries — and rightfully so. Just hours before voters would take to the polls on Tuesday morning, the Associated Press had already named Clinton the presumptive presidential nominee for Democrats, further supporting Sanders' supporters' claims of voting irregularities and voter suppression. Look, I get it on a personal level, too, as a burned Bernie supporter myself. But fellow Sanders supporters who loudly proclaim "Bernie or Bust!" should check their privilege at the door.

And yes, it is about privilege, despite what Shane Ryan at Paste Magazine would have you believe. In a March post, Ryan claimed the notion that the "Bernie or Bust" movement is based in privilege is "utter bullshit" and "rhetorical sleight-of-hand." He continued:

I recognize my privilege. What I’m denying is that this privilege precludes me from taking a broad view of the problems in our country, or understanding and caring about the suffering of others.

That's all well and good, Shane — but what about when Trump nominates an uber right wing justice to the Supreme Court who decides to wipe out a woman's right to choose? Or he actually somehow manages to pass a ban on all Muslims from entering the United States? Or what if he does try to sign a law allowing journalists to be thrown in jail for criticizing politicians? As informed voters, we are supposed to take people running for office — even when they have zero experience — at their word and at their platform.

So, what's confusing, then, is how any of those things affect the average Bernie or Bust-er. It's nice when people say they understand and care about the suffering of millions of women who could be denied access to essential healthcare, or the hundreds of thousands of Muslims who could be denied entry to the country, or the hundreds of jailed journalists, but to not have to worry about being one of those people is something else entirely. People who are forfeiting their votes should be OK with the idea that life could get harder for Muslims, immigrants, generally, and for people abroad (because Trump won't know what to do about a threat of terrorism).

Writer Michael Arceneaux gets it — and acknowledges the devastating impact that not voting for Clinton just because she wasn't your first choice could have on other voters. In a piece for The Guardian, he wrote:

People who refuse to vote for a less-favored Democrat on principle are just punishing a second constituency unlikely to vote: those who know very little about the power they yield because they are so marginalized they feel their say doesn’t matter.

In what is shaping up to be an historic general election for so many reasons, the choice to vote for anyone but Clinton — or worse yet, to not vote at all — undermines the fundamental principle of democracy: That votes count, that voices matter, and that both of those things affect others. And, to be perfectly candid — abstaining from voting at all in the general election is just lazy wannabe slacktivism at its worst. If those voters who've been "Berned" feel the need to bust the democratic process by not voting at all, then how invested could they have really been in the issues that Sanders promoted on his campaign? Choosing not to vote at all because your candidate didn't make the ticket is a short-sighted political temper tantrum that does nothing to help anyone or advance any political cause you supported.

Likewise, if it's all about the issues and not about the person, then Bernie or Bust-ers can take Clinton to task and take a more progressive stance on those issues — something that Sanders has already done by forcing Clinton's progressive hand over the course of the primary season. Similarly, shouting "Bernie or bust!" and voting for Trump is pretty much the antithesis of every value, issue, and platform that Sanders has been about.

Let's not forget the fact that Trump has exactly zero foreign policy experience. And yet, there are enough people out there who would vote for Jill Stein, who cannot win, or not at all rather than vote for the woman who served as the U.S. Secretary of State.

I get that "Bernie or Bust" is about preserving a movement, but let's not cut off our noses to spite the face of the Democratic Party. Was President Obama's eight years in office perfect? Hardly. But Trump could undo all the good that did happen during Obama's watch in just one term — and do a whole lot worse, too. With the primaries basically over — I mean, let's be real, Washington D.C. — it's time to put aside pride and privilege. Clinton may not be the perfect candidate or the perfect president if elected — but consider the alternative: