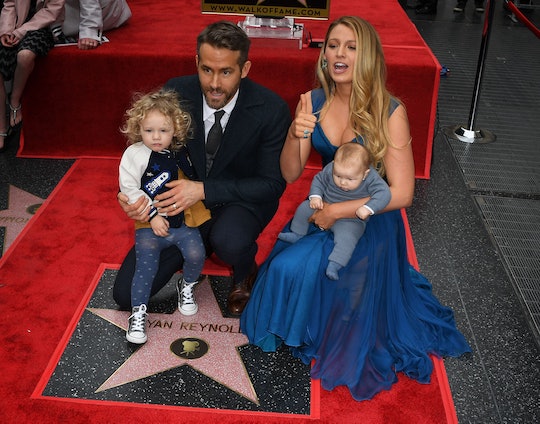 Americans sure do love their celebrities, and just about everyone can appreciate a cute baby. But while some celebrity babies have their own social media followings, others are shrouded in mystery, which is why everyone was shocked last week when the notoriously private Ryan Reynolds and Blake Lively debuted their kids to the world for the first time, after years of hiding. The couple have a 2-year-old daughter, James, and another daughter whose name they've yet to reveal. And as hungry as the public is for gossip, that's too damn bad. Nobody is owed any information about those children, no matter what line of work their parents are in, which is exactly why it's so great that Reynolds and Lively waited to "debut" their children.

Reynolds didn't reveal James' name until she was three months old, after the media had all but confirmed it. In March of 2015, he told Today's Willie Geist, "I didn't want to be the first guy screaming it out to the media. Because as we know, little girls turn into teenage girls and little teenage girls sometimes scan through the archives and go, 'Why did you do that?'" While Reynolds and Lively tacitly agreed to be stalked by paparazzi when they became actors (and really, that's up for debate), James and her sister are not actors. They're not extensions of their parents; they're private citizens who deserve as normal a childhood as they can manage.

That's not to say that the Reynolds girls must be kept cooped up at all times, and so their parents chose to bring them along to watch their father honored as he received a Hollywood Walk of Fame Star last week. But note that while Lively wore a gown, the children were dressed casually. They were still allowed to be kids, and not expected to do the whole red carpet rigmarole. Even when the girls were summoned to pose for pictures, Reynolds and Lively seemed unconcerned that James was far more interested in running, jumping, and playing. Because that's her job, not posing for the media.

Keeping the kids away from the media this long was no easy task; Reynolds famously severed ties with a lifelong friend after they tried to sell a photo of James to the press shortly after her birth. But perhaps they owe a debt of gratitude to Dax Shepard and Kristen Bell, who began campaigning in 2014 for the paparazzi to leave the children of celebrities alone. Within a matter of months, the couple amassed a group of A-listers who agreed to refuse interviews with any publication that bought unauthorized photos of children. The reaction was swift, with many online and print gossip magazines pledging that they'd no longer publish such photos. Thanks to Shepard, Bell, and their powerful friends, we'll only see the Reynolds kids if and when their parents want us to, and that's how it should be.