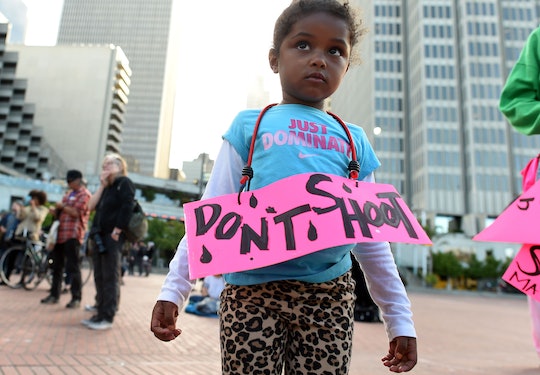 I began this article by repeating a promise I made to myself: I will no longer explain the importance of saying "Black Lives Matter," and why saying "All Lives Matter" in response, dangerously misses the point. There have been countless articles, metaphor-like examples, explainers, and very patient black people, other people of color, and white allies who have tried time and time again to explain why the world needs a "Black Lives Matter" statement. If you don't get it at this point, then chances are you are not willing to fully join the movement, period. But with the recent deaths of Alton Sterling, Philando Castile, and five Dallas police officers, I find it necessary to add to the conversation why saying "Blue Lives Matter" doesn't actually help solve anything.

Like saying "All Lives Matter," "Blue Lives Matter" misses the point. But furthermore, it closes the door to a necessary conversation on systemic racist practices in the police force.

Last week early Tuesday morning, a black 37-year-old father of five, Alton Sterling, was shot to death by a Louisiana police officer outside a convenience store in Baton Rouge, Louisiana. The following Wednesday evening, Philando Castile, a black 32-year-old cafeteria manager, was shot to death by a police officer in his car in Falcon Heights, Minnesota, while his fiancée livestreamed the incident and her 4-year-old daughter sat in the back seat. Officers Blane Salamoni and Howie Lake II (involved in Sterlings' shooting death), and officers Jeronimo Yanez and Joseph Kauser (involved in Castile's death), were all placed on an administrative leave in their respective departments pending investigations. But as many have pointed out, police officers have far too often not faced trial or charges for misconduct, violence and police-involved death of civilians. So while something happened, little more will likely come as a consequence of their actions.

According to a regularly updated database compiled by The Guardian in June last year, police have killed 574 people in 2016 so far. By The Washington Post's count, based on public records, news reports, and social media, the police have shot and killed 515 people in 2016. And people of color are most at risk. In both The Guardian and The Washington Post's reporting, black people and Native Americans were disproportionately killed by police at a much higher rate than their white counterparts. In an interview with NPR, The Washington Post's Kimbriell Kelly explained as well that black people are 2.5 times more likely to be killed by officers than white people.

"If you look at the rate, blacks were 2.5 times more likely to be killed by officers than whites," Kelly said. "And in 2016, half of the victims were white and half were minorities."

Kelly pointed to data suggesting that police officer shooting deaths had increased over the last couple of years. But The Washington Post points out that while that increase has been reported by the National Law Enforcement Officer's Memorial Fund, the average number of police officers intentionally killed each year, in contrast, has fallen to its lowest level during President Obama's administration.

When police officers kill civilians, they are rarely charged with murder, and many aren't brought to trial – like the cases for notable police-involved deaths that took the lives of Tamir Rice, Eric Garner, Natasha McKenna, and Mike Brown. One lone sniper, Micah Johnson, a 25-year-old black man who was reportedly discharged by the United States Army, was killed by a bomb robot after he horrifically killed five Dallas police officers and injured several other people during a peaceful protest.

The numbers are stark — tragic, on both ends, but stark nonetheless. It is clear that "Blue Lives Matter." But the lack of trials and charges for cops who disproportionately kill black lives shows the system doesn't feel the same about black lives.

Individual Good Cops Do Not Equal A Good System‌ ‌

Since the deaths of the five Dallas police officers — Lorne Ahrens, Michael Krol, Michael J. Smith, Brent Thompson, and Patrick Zamarripa — this past week, the attacks and blame towards the Black Lives Matter movement have been swift. The BLM movement did not take the lives of the Dallas officers, of course – their tragic deaths go against the violence the BLM movement aims to eradicate. And the movement must continue. But in response to pushing the BLM movement, many insist on unleashing statements like, "all cops aren't bad," or "there are many good cops out there." This statement is true. But America's policing system, and the criminal justice system is flawed, and individual good cops are not saving black lives, nor do their actions cancel out any evil done by so-called "bad apples."

Michelle Alexander, author of The New Jim Crow:Mass Incarceration in the Age of Colorblindness posted a spot-on explanation on Facebook on why America's system needs to be fixed before the police system is:

I no longer believe that we can "fix" the police, as though the police are anything other than a mirror reflecting back to us the true nature of our democracy. We cannot “fix” the police without a revolution of values and radical change to the basic structure of our society.

In wake of the deaths of Sterling, Castile, Rice, Sandra Bland, Rekia Boyd, and many other black lives, the anti-police rhetoric that follows does not mean, anti-every-single-cop-that's-breathing. Rather it's "anti" an establishment that has historically targeted black and brown communities. It's "anti" racial discrimination in stop and frisk methods, and implicit racial biases uncovered in police forces. It's "anti" a flawed criminal justice system that results in black people having higher incarceration rates than their white counterparts.

Data has shown that black drivers are more likely to be stopped and searched by the police than white drivers. The New York Times reported on traffic stop data out of Greensboro, North Carolina, that showed police officers were more likely to stop black drivers without an identifiable reason, and were more likely to use force. The New York Daily News reported that Castile was stopped by Minnesota police – for petty misdemeanors or misdemeanors like having an invalid license – 52 times in the last 14 years. It's clear, a "system" is in place that works to marginalize black people, and other people of color.