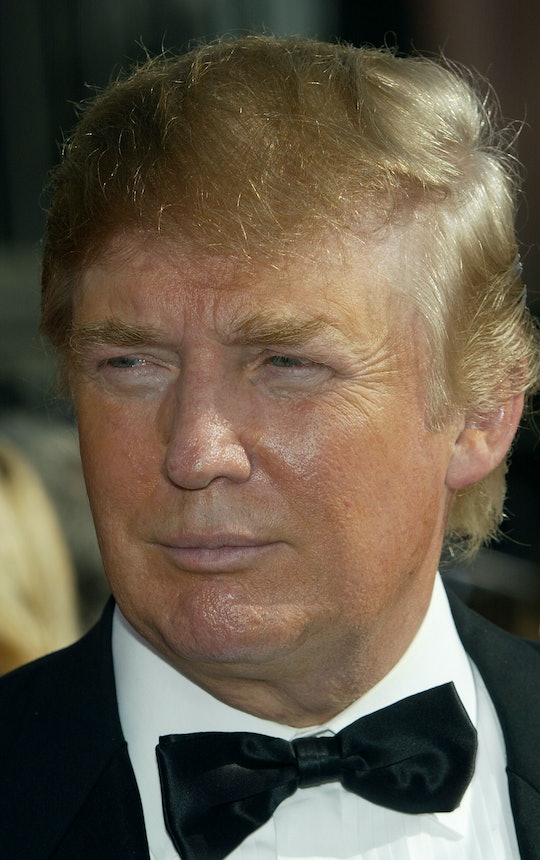 The allegations of sexual assault against republican presidential nominee Donald Trump continued with the publication of a personal story by a writer at PEOPLE on Wednesday. Natasha Stoynoff, who has been with PEOPLE for more than a decade, alleged that she was sexually assaulted by Trump in 2005. Many in support of Trump asserted that Stoynoff, along with other women who have come forward claiming that Trump sexually assaulted them, are just telling their stories now in order to influence the election. It seems like there are some who don't understand why saying Natasha Stoynoff is lying to influence the election is so wrong.

Trump and his campaign have flatly denied any incidents of sexual assault occurred, including Stoynoff's story. Romper has reached out to the Trump campaign for further comment on the allegations and is awaiting a response.

In the early 2000s, Stoynoff, was an entertainment reporter for PEOPLE and covered a lot of events related to Trump's show, The Apprentice. She also, therefore, was kind of on the Donald Trump news beat. Shortly after Trump married his present wife, Melania, Stoynoff traveled to meet with the couple for a post-wedding feature for the magazine. Stoynoff writes in her recent PEOPLE piece that she and Trump, had "a very friendly, professional relationship."

After the first session of the photoshoot for the feature, Melania (then very pregnant with the Trumps' son, Barron) went upstairs to change into her next look. Trump offered to show Stoynoff around the estate — saying that there was one room in particularly that he really wanted her to see. What Stoynoff alleged happened next caught her totally off guard, according to her article:

Stoynoff noted in her piece that she's a "tall, strapping girl" and had grown up with two brothers — she wouldn't have thought she'd have had trouble fending someone off physically, but she did. She described Trump as "much bigger — a looming figure — and he was fast," stating that she was completely thrown off balance by the interaction. To her relief, the Trump's butler burst into the room just minutes later to let them know Melania was ready to continue the interview.

She said they went back downstairs, but Stoynoff said she was in complete shock. "In those few minutes alone with Trump, my self-esteem crashed to zero," she wrote, and began to try to comprehend why he'd done behaved that way.

"Did he think I’d be flattered?" she wrote — a question that many women who have experienced unwanted sexual advances ask themselves. She held herself together long enough to finish the interview, and wrote that once Trump was back in the same room as Melania, everything that had just transpired between them seemed to disappear. Stoynoff said that later, alone in her hotel room, berated herself for not defending herself somehow.

But many women react this way. Women often imagine that if they were to find themselves in that situation, that they would be able to do a number of things to defend themselves. But no one can ever be sure of how they'll react in the moment.

Stoynoff said she was wracked with guilt and questions, and thinking she needed to clear her head, decided to keep an appointment with a massage therapist at Trump's resort, which he had arranged for her prior to the interview. When she arrived, the therapist allegedly informed her that she had just missed her visitor.

She hadn't been expected anyone, she said.

She alleged that Trump had been there, waiting in the massage room for her, for 15 minutes before she arrived. Then he had to leave for a meeting. She tried to shake off the implications of the information, but halfway through the massage had grown so afraid that Trump would burst in, that she left and went straight to the airport.

When she returned to the PEOPLE office, she told a colleague about what had happened — and they insisted that she had to tell her editor. But Stoynoff said she hesitated, and wrote that she felt ashamed. And that, "It wasn't like he had raped me," — a feeling that many women grapple with in the aftermath of sexual assault. So she kept quiet and tried to forget about it. After the feature ran, she alleged that Trump left her a voicemail thanking her for it, saying that she was "great" — and she wrote that she felt like he thought she was great because "she'd kept her mouth shut" about what he'd done.

After that, she requested to be taken off the Trump beat and never interviewed him, or covered stories about him, again. The tape of Trump and Billy Bush in 2005 (the same year she claims Trump assaulted her) has Trump basically describing exactly what Stoynoff claims he did to her. According to The Washington Post, Trump said on the now infamous tape:

You know I’m automatically attracted to beautiful — I just start kissing them. It’s like a magnet. Just kiss. I don’t even wait. And when you’re a star, they let you do it.

When Stoynoff, listened to the tape, she wrote, "I felt a strong mix of emotions, but shock wasn’t one of them."

Those who support Trump have accused Stoynoff, and other women who have come forward, as only coming forward now in order to influence the election. The comparison being that, many women who have claimed sexual assault by Bill Clinton came forward years ago. This is technically true — but needs the proper context: many women ultimately came forward while Clinton was president — particularly after information about his affair with Monica Lewinsky surfaced. Clinton was never charged with any crime.

The women who alleged sexual harassment or assault against Bill Clinton did so during politically relevant times for him — but also, in order to form solidarity among victims. Gennifer Flowers only came forward with her allegations so that she could testify in Paula Jones' case in 1998.

Trump has blatantly used these women as a political strategy in a strange attempt to discredit Hillary Clinton via the alleged misconduct of her husband. The women who have come forward with allegations against Trump are aiming to hold him accountable for his behavior — not make him responsible for the behavior of a spouse.

The women who have come forward with stories about Trump's sexual misconduct have no doubt dealt with enough shame and self-doubt in their private lives, and, by coming forward during this particularly tense and worrisome election year, are putting themselves out there and are being forced to not only have to relive their traumas, but to also have them picked apart by media pundits, politicians, and the public.

While many have been quick to criticize these women for "using" their stories politically, the proof is in the pudding. It's not these women who are turning these stories into strategy — it's the politicians, it's the media, it's the pundits.

Just as these women aren't to blame for what happened to them at the hands of powerful men, they aren't responsible for how these stories are used.