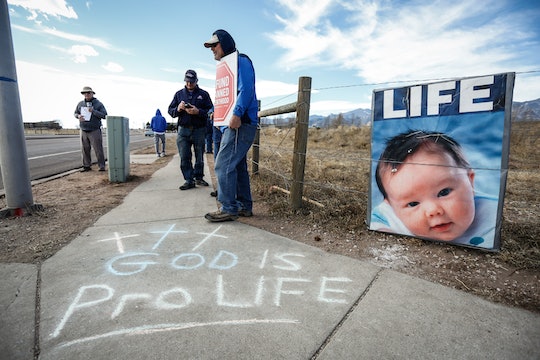 Why SB 8 Makes No Sense At All

This week, Texas Gov. Greg Abbott signed a bill into law that effectively outlaws abortion in the state, despite the fact that abortion is still legal in the United States. The law's provisions are so inane, and, some argue, possibly unconstitutional, that it's almost hard to take seriously. Except that it is, actually, a law now in the state of Texas. But Texas' SB 8 makes no sense at all, if only because it codified some things that have already been declared unconstitutional, such as fetal funerals. Aside from blocking access to safe and affordable abortion, as per Roe v. Wade, the Texas law will also drive the state into an unnecessary, expensive legal hole if it insists on defending the bill against the Center for Reproductive Rights or Planned Parenthood, which have pledged to fight the law in courts.

The wording of the bill goes far beyond what are normally considered TRAP laws, which serve to criminalize abortion through backchannels. No, SB 8 goes so much further.

The way the law is written, anyone who "aids" an abortion could be in legal trouble. Like the receptionist who books an appointment or a friend or family member who gives a woman a ride to a clinic to get an abortion.

The law attacks safe and legal abortion from so many sides it's hard to figure out which provision in the law is worse. Which was likely the point for anti-choice legislators in the state — make women's heads spin and they won't know what hit them. Luckily, pro-choice advocates aren't so fickle and are ready to fight the bill, even if Texan Republicans have sworn to "refuse to enforce any and all federal statutes, regulations, executive orders, and court rulings, which would deprive an unborn child of the right to life.” Still, it won't be an easy fight for women.

As out there as prosecuting a clinic receptionist or requiring aborted fetal burial may sound, the most troubling thing might be that the law uses slang to define certain types of abortion. The bill would outlaw "partial birth" and "dismemberment abortions," both slang for medical procedures that have already been considered illegal by courts, both at a state and federal level.

A "dismemberment abortion" has a certain ring to it, because it was a term adopted by the kind of anti-choice protestors that assemble outside of abortion clinics on the daily and threaten women in search of health care. In reality, a D&E is a safe and common procedure that patients might opt for by choice or necessity in the second trimester. It's technically called "dilation and evacuation" and accounts for 11 percent of all abortions, according to the Guttmacher Institute. The Supreme Court already ruled on this type of abortion under the George W. Bush administration.

The new Texan law also prohibits the sale of fetal tissue, which is, again, already illegal, though fetal tissue donation, vital to medical research, is legal.

Texas legislators should have consulted their handbook (if only there were such a thing) before wasting tax payer money debating on, voting for, and eventually defending this law. Nancy Northup, president and CEO of the Center for Reproductive Rights said that her organization is prepared to fight, yet again, on behalf of Texan women. "Texas politicians haven’t learned their lesson, continuing to pass sweeping restrictions which interfere with a woman’s right to safe, legal abortion," she said in a statement. Texas Democrats have also pledged to fight against the bill, though it might already be out of their hands now that it's been signed by the governor.

Texas legislators passed this law based on flawed science and a gross misinterpretation of current federal and state laws. Talk about irresponsible.

More Like This
Can Dogs Sense Labor? 5 Signs Something Might Be Up
The Best Dressed Parents At The 2023 Grammy Awards
Beyoncé’s Kids Got A Sweet Shout-Out As She Made History At The Grammys
Kit Harington Announced His Wife Rose Leslie Is Pregnant With Their Second Child
What Parents Are Talking About — Delivered Straight To Your Inbox