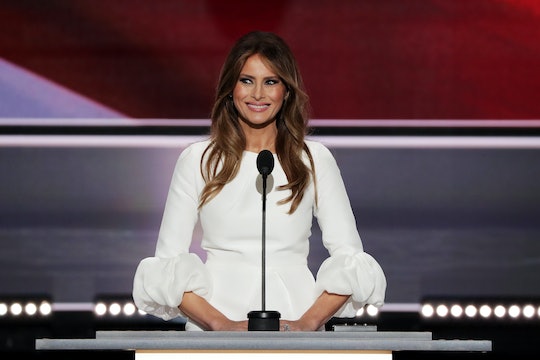 Why Should Melania Trump Get A Pass On Plagiarism? These 5 People Didn't

Another day, another scandal for the Trump campaign, am I right? Billionaire Donald Trump is but hours away on Tuesday from securing the GOP presidential nomination at the Republican National Convention in Cleveland, Ohio, but he couldn't even get through the first day of the convention without a major incident. Multiple outlets have claimed that Melania Trump plagiarized a speech from Michelle Obama at the 2008 Democratic National Convention. The Washington Post has a great line-by-line comparison of Trump's and Obama's speeches and the two bare more than just a resemblance — it's unapologetic copying.

Within hours of the the accusations hitting online outlets, the Trump campaign was quick to issue a statement claiming Melania wrote her RNC speech all on her own and in her own words. The link between Trump's words and Obama's — at times verbatim from the 2008 DNC speech — says otherwise. But, like so many issues that have beset Trump and his campaign, Trump has tried to spin the issue of Melania Trump's plagiarism as if everyone was just making a big deal out of nothing. But it's not nothing: If Trump wants to be the next leader of the free world (and his wife carry out the many important duties of First Lady), we need to hold him accountable at his — or his wife's — word.

Plagiarism is not some casual, dismissible accident: It's theft. It's lazy. And it demonstrates that the Trump campaign is willing to cut corners and do things the easy way. Will Trump cut corners if he's fighting terrorism or bolstering the economy?

While you might associate plagiarism with "little" things like school work, it has actionable consequences and even legal repercussions when plagiarism happens in the professional world. Plagiarism even prevented a major U.S. politician from seeking the presidency: You may know him as Vice President Joe Biden.

Biden has long chased the cushy chair in the Oval Office: He's run for president twice. However, Biden's first run for the presidency in 1988 was cut short when Maureen Dowd at The New York Times exposed that many of Biden's campaign speeches on the trail were lifted from Neil Kinnock, a British politician, and both Robert and John F. Kennedy. These plagiarism allegations forced Biden to drop out of the race.

If our current VP didn't get a pass then, why should Melania, Donald, or the Trump campaign get a pass on plagiarism now? Both Donald and Melania, at minimum, have an obligation to issue an apology and to admit that the similarities in the speeches are not acceptable.

Here are five other plagiarists who bore the full brunt of their actions.

The Gray Lady. The paper of record. With a 165-year history to its name, The New York Times is hardly some tabloid broadsheet — its renown has afforded it a level of steely journalistic credibility. But that credibility nearly came crashing down when in 2003, The New York Times discovered that Jayson Blair, one of its own reporters, had been not only plagiarizing other publications, but fabricating stories entirely. Blair was fired by the The New York Times and has essentially been blacklisted from ever writing for the news again.

Jonah Lehrer was a contributor for The New Yorker — but you won't see many of his bylines now. In 2012, Lehrer resigned from The New Yorker after news broke that he plagiarized everything from press releases to himself by recycling verbatim old content. Lehrer's plagiarism caused two of his books, Imagine: How Creativity Works and How We Decide, to recalled by his publisher.

As BuzzFeed began to rise in popularity in 2014, so did Benny Johnson, a former writer for the online media outlet who covered "viral politics." After Twitter users began pointing out to BuzzFeed editors that Johnson had plagiarized in multiple articles — 41, to be exact — Benny Johnson was fired from BuzzFeed after just two years.

Timothy Goeglein was a Special Assistant to President George W. Bush and also served as a Deputy Director in the White House from 2001 to 2008. In 2008, it was revealed that Goeglein has plagiarized several columns for an Indiana newspaper from a Dartmouth College publication. He owned up to it immediately and resigned from the White House.

During this year's primary election season, former neurosurgeon Ben Carson was just one of the clown car assembly of GOP primary candidates. In addition to having the titles of "neurosurgeon" and "former Republican primary candidate" on his business card, Carson is also a published author. In 2015, BuzzFeed broke the story that Carson had plagiarized a number of passages in his 2012 book, America the Beautiful. Carson apologized and was summarily destroyed in the GOP primaries this year.

For a presidential candidate who has the brass balls to call his Democratic rival "Crooked Hillary" — even saying in a June campaign speech, "Hillary Clinton may be the most corrupt person ever to seek the presidency" — where's the accountability when his wife's plagiarism is just as crooked? Trump even doubled down on the plagiarism denials Tuesday morning, with Trump campaign chairman Paul Manafort telling CNN, "To think that she'd be cribbing Michelle Obama's words is crazy."

That's right folks. The campaign chairman of the man who wants to be our next president just called the public's assumption that Melania Trump's word-for-word plagiarism of Michelle Obama is "crazy" (the Trump campaign is famous for gaslighting) and that we all should just move on.